SHORT VERSION:
Chacon and One-Eye follow David, Rose, Casey, and Kenny to a 4th of July carnival and start looking for them, and One-Eye finds them first while they are conversing with Edie and Melissa outside of their R.V. and Kenny has just admitted to them that they aren’t a real family and just pretended to be one in order to smuggle marijuana over the border. Before One-Eye can harm them, Don comes out of the R.V. and uses his D.E.A. agent defense skills to fight him and knock him out. He sends Melissa off to find a cop before scolding David for smuggling drugs, but then Chacon appears with Melissa in his grip and a gun at her neck. He takes Don’s gun before returning his daughter to him, then tells David and company that he is going to kill them for stealing his marijuana, among other things. David tells him to just shoot him, saying that Don and his family are just in the wrong place at the wrong time, and he praises Rose, Casey, and Kenny for their good qualities before saying that he loves them all. Chacon is unmoved, but then some fireworks go off and distract him, enabling David to get Don’s gun away from him, and Kenny ends up dazing Chacon with a punch to his face. Don then cuffs him, and Kenny shares a kiss with Melissa after she remarks how amazing he was. David also kisses Rose.

David tells Don that he and his “family” are going to leave now, but Don says that, while he believes that they are good people, they broke the law and put his family in danger, so he is going to arrest them….right after he turns around and hugs his family. Rose, Casey, and Kenny recognize this as their cue to flee, but David decides to stay behind. The next day, he delivers the weed to Gurdlinger, but Gurdlinger refuses to pay him since he is late with it (though he soon admits that he was never going to pay David even if he did arrive on time). Suddenly, Don and a squad of D.E.A. agents burst into Gurdlinger’s office and arrest him and his associates, and we find out that David stayed with Don in order to cut a deal with him and the D.E.A. where, in exchange for his and his friends’ freedom, he would help them perform this sting operation on Gurdlinger and also testify against him and Chacon when their trial comes. Don tells David that he will need to go into witness protection for the next three to six months, along with any other witnesses to the crime, which pleases him because this means his “family” will be joining him.

David, Rose, Casey, and Kenny are next seen living in a suburban neighborhood somewhere and continuing their façade as a family until the trial ends (which they can hardly wait for, having come to find suburban life unpleasant). David and Rose have also become a couple.

LONG VERSION:
While David (Jason Sudeikis), Rose (Jennifer Aniston), Casey (Emma Roberts), and Kenny (Will Poulter) are escaping from Pablo Chacon (Tomer Sisley) and his henchman One-Eye (Matthew Willig) following a failed attempt by the former to kill them for unintentionally stealing his marijuana that they are smuggling in their R.V. for Gurdlinger (Ed Helms), Kenny gets bitten on the testicles by a tarantula that stowed away in a fruit basket they accepted as a gift from One-Eye’s mother while getting the consignment. After parking the R.V. at a 4th of July carnival and getting Kenny checked into a nearby hospital for treatment, David calls Gurdlinger and rebukes him for tricking him into stealing marijuana from Chacon and getting him marked for death. He then demands for Gurdlinger to increase his payment from $100,000 to $500,000, tacking on the extra cash as “hazard pay”, and warns him that, if he doesn’t agree to it, he will return the marijuana to Chacon and also provide him with his address. Gurdlinger agrees to the fee increase so long as David gets the marijuana to him by tonight. David then finds out from a doctor that Kenny will be held at the hospital for a few hours to be fully treated, and though this doesn’t sit well with him, he is forced to accept it because Rose and Casey don’t want to leave him here. As they wait, Casey goes on a date with Scottie (Mark L. Young), a guy she met in the waiting room, and David and Rose find themselves growing more attracted to each other and almost kiss, but a returning Casey interrupts them.

However, after David and company check Kenny out, David tries to rush him onto the R.V. and hurts him a little more. When Rose and Casey call him out on his behavior, David angrily says that they have a deadline to meet, then – blinded by his anger – he mentions the $500,000 payment he is getting. All the others are shocked at this, considering he promised Rose $30,000 and Casey $1,000 and Kenny was doing his part for free. Rose and Casey say that they want to renegotiate their salaries, but David refuses to even consider this, so Casey gets her bag out of the R.V. and heads off into the carnival. Rose and Kenny tell David that they need to go and get her, but David nixes that thought, and when they refuse to leave without her, he tells them that they all deserve each other before driving off in the R.V. alone. However, as he goes, Chacon and One-Eye make their arrival at the carnival.

Casey hooks back up with Scottie, and while they are hanging out, she tells him about her recent episode with the others and admits that she almost saw them all as something akin to an actual family. Scottie then tries to turn up the heat between them, but she tells him that she is not interested in doing that because she is emotionally out of sorts right now. Just as he starts to force the issue, Rose and Kenny find them and come to Casey’s defense, and Rose ends up flooring Scottie with a punch that breaks his nose, so he takes off. Shortly afterwards, they are found by David, who had an attack of conscience and decided to come back for them, and he offers to split the $500,000 evenly between them, which they accept. While walking back to the R.V., they cross paths with Edie (Kathryn Hahn) and Melissa (Molly Quinn) outside of their own R.V., who have come with Don (Nick Offerman) to the carnival to see the fireworks taking place later on. Melissa doesn’t want to be around them, especially Kenny, since she walked in on them the night before while Kenny was getting lessons from Rose and Casey on how to kiss with David watching, and she encourages her mother to just keep on going before telling Kenny that what happened last night was wrong. Thinking that Melissa saw her touching Rose’s breasts that same night, Edie tells her daughter about it and then explains that she and Don are having intimacy issues, but Melissa clarifies by telling her all about what she caught the Millers doing together. David, Rose, and Casey try to tell them that what they were doing was not what it looked like, but Kenny – being too honest for his own good and not wanting to lose whatever chance he has with Melissa – confesses that they are not a real family and David hired them to help him smuggle drugs across the border.

As David and Rose attempt to cover up this statement, One-Eye suddenly appears behind them. He gets everyone’s attention and makes ready to shoot them with his gun, but then Don bursts out of his R.V. and uses his D.E.A. agent defense skills to fight and knock out One-Eye with relative ease. After binding One-Eye’s wrists with a zip tie, he orders Melissa to go find a police officer before scolding David for smuggling drugs. David warns him that there is another guy trying to kill them as well, after which Chacon appears with Melissa in his grip and a gun at her neck. After getting Don to drop his gun and then taking it, Chacon sends Melissa back over to her parents, and then he makes David fork over the keys to the R.V. He then informs the Millers that he is going to kill them all, not just for stealing his marijuana but also for a bunch of other acts they’ve committed against him, or he feels that they’ve committed. David steps forward and tells him to just kill him and leave the others alone, saying that Don and his family are just a sweet, innocent family that were in the wrong place at the wrong time, and then he praises Rose, Casey, and Kenny for their good qualities before saying that he loves them all. Chacon decides to kill David first so he doesn’t have to watch his “family” die, but then the fireworks go off and distract him, enabling David to get Don’s gun out of his hands. Casey gets a hold of it and throws it like a hot potato to Rose, who accidentally shoots a bullet into Chacon’s left shoulder. When Chacon tries to use his other gun, Kenny runs up to him and punches him in the face to daze him. Melissa goes up to Kenny and tells him that what he did was amazing, and he suddenly gives her a passionate kiss, after which David decides to take the opportunity to kiss Rose as well. Don cuffs Chacon and then gets a steamy kiss from Edie for being a bad ass.

David gives Don his gun back and tells him that he and his “family” are going to go now, but Don says that, while he believes that they are good people, they still broke the law and put his family’s lives in danger, so he is going to place them under arrest….right after he turns around and hugs his family. Rose, Casey, and Kenny recognize this as their cue to get away, but David decides to stay behind. We then cut to David getting the marijuana to Gurdlinger the next morning, but Gurdlinger informs him that their deal is off because he was late with the delivery. However, David soon gets him to admit that he was never going to pay him even if he had arrived on time. Suddenly, D.E.A. agents assault the building and cuff Gurdlinger and all his associates and take them away, and Don soon walks in. We find out that the reason David stayed behind with Don (other than having anticipated that Gurdlinger would double-cross him) was so he could cut a deal with him and the D.E.A. where, in exchange for his and his friends’ freedom, he would help them perform this sting operation on Gurdlinger and also testify against him and Chacon when their trial comes. Don informs David that he will now have to be put in the witness protection program for the next three to six months, along with any other witnesses to the crime, which puts a smile on David’s face because this obviously means that Rose, Casey, and Kenny will have to stay with him.

The quartet are shown living in a nice suburban neighborhood and continuing their façade as a family until the trial is over (which they can hardly wait for, as they don’t care much for suburban life), and David and Rose are now a couple. It is also shown that they are growing marijuana plants in their backyard. 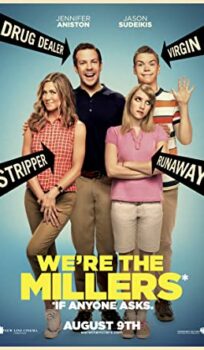