Bob (Bill Murray) steals the show when Good Morning America interviews Leo Marvin (Richard Dreyfuss) about his book “Baby Steps”. Furious, Leo has him committed to an insane asylum, but he is quickly released, infuriating him even more. He leaves Bob down the road but he hitchhikes his way home.

Breaking into a shop, he steals explosive powder and hunts down Bob, who has left the house. Convincing Bob that he’s come up with a cure called “Death Therapy”, Leo ties Bob to a chair, sets up the explosives, and leaves. Bob however interprets his situation as “he’s all tied up inside”. He frees himself and rushes off to tell Leo that he’s cured. Unwittingly, he leaves the explosives in the house which blows up.

Leo has himself committed to an asylum, ignoring his family who tell him that they don’t care if their house is gone. Leo finally recovers from the trance, too late to prevent the marriage of Lily and Bob.

Before the credits, we learn that Bob went back to school and became a psychologist, wrote a huge best seller called “Death Therapy”, and that Leo is suing him for the rights. 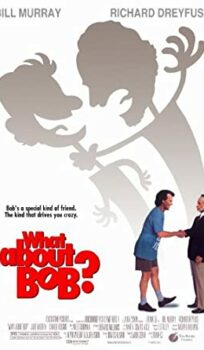