What Happened to Monday
aka: Seven Sisters
(2017)

Monday (Noomi Rapace) sold out her sisters (all played by Noomi Rapace) to Nicolette Cayman (Glenn Close). She gave up her sisters and wired a massive amount of money to Cayman for her campaign for Parliament. In exchange, she would be allowed to live her life with the twins she was carrying.  Her plan is foiled and Caymen is exposed to have been killing captured siblings rather than putting them in cryo sleep. Monday dies but her twins survive.

The anti-sibling legislation is repealed and the surviving twins sisters are allowed to begin a life that is their own. Caymen is set to be given the death penalty. 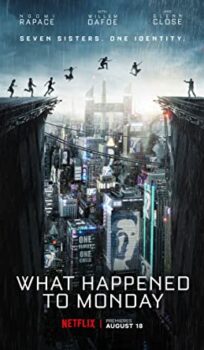