Pooper:
The main vampires reunite at the masquerade ball to stop the other vampires and zombies from eating Stu. The group is then attacked by werewolves after they leave and Stu is seemingly killed. It is revealed that Stu survived, is now a werewolf himself, and the vampires and werewolf pack strike up a friendship.

Long Ending:
In this mockumentary-style horror-comedy, a documentary team is invited to spend time documenting the lifestyle of four vampires living together in a flat. We learn along the way that vampires can be killed by sunlight, do not age after they’ve been turned, can fly, transform into animals, possess varying degrees of hypnosis powers, can’t stand crosses and silver, and must be invited in before they enter a building.

The roommates dress in very old-fashioned clothing and have no other friends. They try to go to clubs to pick up victims, but usually can’t get invited in. One night, Petyr turns a man named Nick (Cori Gonzalez-Macuer) into a vampire. He begins hanging out with the roommates, modernizing their home with technology and helping them get into clubs. The vampires tend not to like Nick, but they strike up a close friend with Nick’s human friend Stu (Stu Rutherford), who doesn’t mind their vampiric ways. Nick flaunts his powers, tells everyone he meets that he is a vampire and gets the roommates involved in a rivalry with a local pack of werewolves. Eventually, Petyr is killed by a vampire hunter that Nick met at a bar and gave the roommates’ address to. As a result, the roommates ban Nick from their home.

An annual unholy masquerade ball is approaching, sponsored by both vampires and zombies. Vlad thinks he will be the guest of honor, but learns that the ball will actually be honoring the Beast. We learn that the Beast is actually Vlad’s ex-girlfriend, and that his “defeat” was her dumping him. He refuses to go to the ball.

At the masquerade ball, Deacon and Viago see Nick and Stu are in attendance. Deacon wants to fight Nick once he learns that Nick turned Jackie into a vampire without permission. The vampires stop their in-fighting once the rest of the crowd learns that Stu is a human and wish to eat him. Things look grim for Stu, but Vlad shows up and after fighting the Beast’s new boyfriend (who is ultimately killed by Stu), they are allowed to leave the ball. On the way home, they run across the werewolves mid-transformation and the pack attacks and seemingly kills Stu. His death makes the remaining vampires sad, but also leads to them strengthening their friendship.

Later, Nick discovers that Stu survived the attack and is now a werewolf himself. The vampires and werewolves befriend each other (despite the vampires’ flat now smelling like dog hair). Viago has also turned his old love into a vampire so they can be each other, despite the fact that he is robbing the cradle as she is 90 and he is over 400 years old (though she looks far older than him). It is also hinted that Vlad and the Beast are dating again. 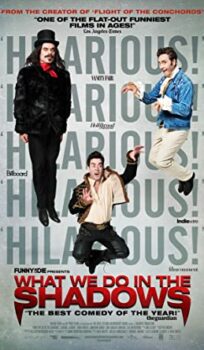