SHORT VERSION:
At their high school’s post-prom party, Ryan finally ditches Ashley because of her numerous personality and physical flaws, and she winds up having sex with the school weirdo Dunleavy. Meanwhile, Maggie – who was earlier told by Ryan of his feelings for her and the deal he made with Chris, but she didn’t believe him – has come to see plenty of Chris’ true nature that night, so she pulls a prank on him that leaves him thoroughly embarrassed in front of everyone.

Ryan and Maggie meet up at their homes afterwards, and after ironing out the wrinkles between them, they kiss and spend the rest of the night together, and presumably get intimate.

LONG VERSION:
Ryan (Shane West) slowly discovers how it was a mistake to bother pursuing Ashley (Jodi Lyn O’Keefe) after finding her to be petty, catty, self-centered, clueless, rude, and whiny, and in possession of physical flaws that he can’t ignore or deal with. Plus, in his efforts to get close to her, he has dissociated himself from Floyd (Aaron Paul) and his other close friends, and Maggie (Marla Sokoloff) – whom he has started to develop strong feelings for – views him negatively. One day, Ryan reaches his limit with Ashley after she insults an unattractive waitress at a café for no good reason and tells her that they are through. At school the following day, he comes up to Chris (James Franco) and his friends and finds out that Chris plans to do the “nail and bail” strategy on Maggie – something Ashley had earlier told him that Chris has done with every other girl he has courted – on prom night, and Ryan tells him that that won’t work because Maggie is too good for that, but he blithely ignores him. Ashley’s equally-clueless friends later confront Ryan at his house and demand to know how he could just ditch Ashley like he did, and ask him how she could convince him to take her back. He sarcastically says that, short of her camping out on his lawn and begging profusely, there isn’t a way.

That night, he confesses to Maggie about the deal he and Chris made and that he told Chris what to say and how to act around her, and also admits his feelings for her. She responds by calling him pathetic and a liar, believing that he is trying to tear her and Chris down because things didn’t work out with Ashley. The next night, Ryan discovers that Ashley’s friends believed he was being sincere about what he said to them, for he sees Ashley on his front lawn begging him to take her to the prom, so he exasperatedly agrees to.

While on the way to the prom with Chris and his friends, Maggie finally gets exposed to Chris’ true nature when he openly disses Ryan and prods her to join in on it. At the prom, Ryan notices Chris dancing with Maggie, and Chris sees him looking at him, so he gives Maggie a big kiss on her neck. This spurs Ryan to break into the band room and get an accordion, and then he gets back to the gym and onto the stage and plays a song that Maggie always liked to listen to and dedicates it to her, and she is visibly moved. As he is doing this, Floyd executes a prank in honor of Virgil Doolittle (a guy who attended the school years back who got expelled and then arrested for removing and stealing the neck from the statue of school founder Cooper Gilmore) by turning on and then wrecking the switch that causes the gym floor to open up for the pool beneath it, and many of the students wind up taking a dip. Amidst the mayhem, Ryan sees Chris leaving with Maggie and follows them, and upon getting outside and seeing cops and firemen arrive, he gets back into Floyd’s good graces by fingering him as the prankster and getting him placed under arrest to boost his popularity. Ryan then steals a limo to go to the nearby hotel where the post-prom party is being held, knowing that Chris has taken Maggie there, and Ashley appears in the back ready to have sex with him once they get there.

Chris and Maggie get a room, and Maggie tells him to lie down on the bed and get comfortable, so he strips down to a pouch thong and does as she says. Meanwhile, Ryan tries to look for Maggie while Ashley locates their room, and after pulling him in and attempting to get physical with him, he manages to wriggle his way out of the situation by telling her that he has to leave to get some champagne for them. Once he steps out, he throws the keycard down and continues his search. Maggie ties Chris to the bed and blindfolds him, and then she tells him that she has just played him. She then stuffs a gag in his mouth and takes a Polaroid of him and has it passed around the other students before leaving the hotel, and many students come into the room and mock and playfully torment him for the rest of the night. The weirdo Dunleavy (Manu Intiraymi) comes up to Ashley’s room and finds the keycard, so he enters it, and Ashley has sex with him all night long. Ryan is unable to find Maggie and goes home, but not before seeing the misfortune that has befallen Chris.

Ryan leaps over to Maggie’s balcony to talk to her, and apologizes for any wrongdoings he has committed against her. She tells him how hurt she is over how he deceived her and steered her into the world of the popular clique and made her feel like she belonged, and he replies that she does belong – with him. They then kiss and spend the rest of the night together, and presumably get intimate.

*After Floyd gets arrested, the sheriff (David Koechner) comes up to the arresting officers and says that he will deal with him. He then takes Floyd out to a secluded spot in the woods and makes him dig up a sack containing something. The sheriff then sticks his nametag on it, and before leaving Floyd there, he tells him that he needs to think about his future. Floyd checks the nametag and sees that the sheriff is Virgil Doolittle, and the sack contains the missing neck. As dawn is breaking, Floyd goes up to the statue with the neck and an acetylene torch, and he removes the head and puts the neck back on, but then he welds the head on backwards. 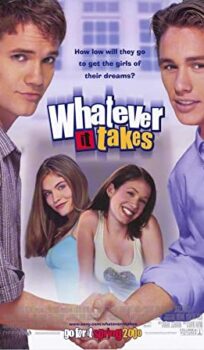