A brilliant, misanthropic New Yorker named Boris (Larry David) begins to live a bohemian life. Melodie (Evan Rachel Wood) shows up on his doorstep, having run away from Mississippi. Boris agrees to let her stay the night. He later consents to have Melodie stay until she can find a job. Melodie is an uncultured young woman with an optimistic view of life who develops a fondness for Boris. She suggests they should be together, but Boris responds with disbelief and disdain.

Melodie gets a job walking dogs and accepts a date. Boris is convinced the man is not good for her, but Melodie goes on the date. She returns, saying her date “loved everything in the world too much”, and Boris realizes he loves her. The next week, they marry. After a year, Melodie’s mother Marietta arrives, having divorced Melodie’s father and renounced her wealth. Marietta dislikes Boris and wants Melodie to get a divorce. Melodie goes to dinner with Boris’ friend Leo and ends up sleeping with him.

Melodie’s father John arrives to reunite his family; when he sees how his ex-wife has changed, he goes drinking. He meets and makes a romantic connection with a man named Howard. Melodie tells Boris about her relationship with Randy; Boris says he knew this day would come. He jumps out the window, landing on and breaking the legs of a woman named Helena. Boris visits her in the hospital and she invites him to dinner. 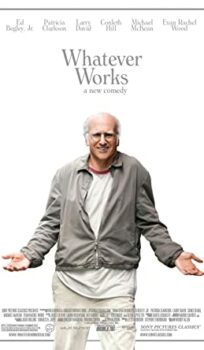