What’s Eating Gilbert Grape starts when Arnie (Leonardo Dicaprio) and Gilbert Grape (Johnny Depp) are waiting together for a ‘train’ of campers and mobile homes. Arnie has a mental disability: autism.

The scene cuts to Gilbert talking about his family. His dad deserted the family and then hung himself. His mother used to be the most beautiful girl in the land, but when her husband left, all she did was eat, and now she’s over 500 pounds. His sister, Ellen, just got her braces off. His other sister, Amy, was a cook, but the school she worked at in the kitchen, burned down the year before.

Gilbert works at a small-town department store in Endora. He states he’d never go to their rival store, Save-A-Lot (?). He’d rather die.

His manager tells him to take a delivery to Betty Carver’s house. Betty Carver is married with two children, but has a secret affair with Gilbert. The father comes home, but doesn’t catch them. He tells Gilbert to come to his insurance company for life insurance.

While Gilbert is in the house with Betty, Arnie is off climbing a water tower. Gilbert doesn’t know this, but he hears sirens and knows what’s going on. Arnie eventually comes down, and the police warn him that he can never do that again. Obviously, Arnie has done this repeatedly.

Gilbert is sweeping at the store at watching a girl called Becky. She doesn’t notice. While he’s watching, Betty Carver, comes up and says she needs a ‘delivery’ Thursday, meaning she wants to get with him because it’s their anniversary. Then, the manager calls him, but Gilbert hides behind the chips. Becky says, “he’s behind the chips”. He drives Becky and her food home with Arnie. Arnie tells her that he’s turning 18 and having a birthday party, but she can’t come. Becky says that’s okay.

Gilbert starts to like Becky, and calls off the affair with Betty. Once, Gilbert is hanging out with Becky, but has to leave so he can give Arnie a bath. He says he’ll be back, though. He helps Arnie a little, then tells him he can do it by himself. Gilbert goes back to Becky and comes home at night. In the morning, Gilbert finds Arnie still in the bathtub, freezing. Arnie will no longer take baths. Later that day, Betty’s husband is found dead, drowned in a kiddy pool. We never find out who killed him, although some people may think Betty Carver may have killed him.

Then, Arnie again climbs the water tower, only this time he’s sent to the police station. Gilbert’s mother is very angry. And, although she hasn’t gone outside for many many years, goes to get her son back. Arnie is set free. When they walk to get back to the car, everyone starts at the mother. Some take pictures and laugh at her weight.

Later, Gilbert gets mad at Arnie for eating cake he bought at Save-A-Lot (and other obvious reasons). He slaps Arnie and runs out the door. Arnie runs away, too. Arnie is found at Becky’s house, and is picked up by his sisters. Gilbert is watching the whole time. The next day is Arnie’s 18th birthday party.

Gilbert arrives at the birthday party and everyone forgives him. He has a little clash with his mom for running away, though. His mother then decides to go to her own room, which she hasn’t done in years. She tells Gilbert to get the birthday boy, Arnie. When Arnie comes up to his mother, we find that she has died. Then, to avoid further humiliation about their mothers’ size, they burn down the house.

Gilbert and Arnie live with Becky and her grandmother in a mobile home. 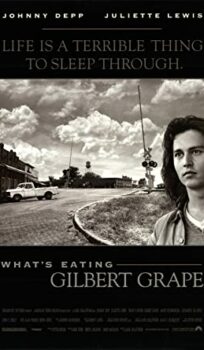