Judy falls for Howard in the hotel gift shop.  Howard is there to compete for a big grant.  At the reception dinner, Howard arrives to find Judy there impersonating Eunice.  Everyone is so taken by her, that Howard has to play along.  The next day, there is a meeting where the grant winner will be announced.  All the stolen suitcases get mixed up.  The mob guys have the rocks, and the spies have the dirty laundry.  They all come to the meeting to get the suitcase they want.  In the commotion, Howard and Judy grab all four suitcases and escape in a stolen VW bug.  After a mad chase through San Francisco, they all end up driving into the bay off a pier.

They are taken to court, where the nervous and irritable judge turns out to be Judy’s father.  Howard loses the grant because of all the mayhem Judy caused.

At the airport going home, Howard is telling Judy that he never wants to see her again.  They are stopped by the rich lady.  There is a reward for recovering the rich lady’s jewels.  However, that just covers the stolen car, damage to the hotel, etc..  A downcast Howard still has to return home without the grant.  The head of the grant, Mr Larrabee, shows up to say goodbye.  Eunice and Mr Larrabee have become attached, and Eunice is going to stay with Mr Larrabee.  While they are talking, Judy realizes that the other grant candidate stole someone else’s research.  Mr Larrabee rips up the  check, and tells Howard he will get the grant after all.  Howard looks for Judy to thank her, but she is gone.  On the flight home, Judy has the seat behind Howard.  He tells her he loves her. 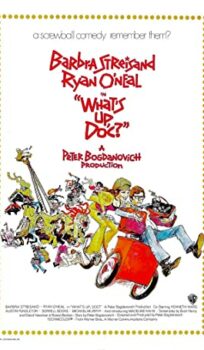