After Harry (Billy Crystal) and Sally (Meg Ryan) end up having sex one night, when he comes to comfort her upon her finding out her ex Joe (Steven Ford) is getting married, the next morning he storms off. This causes a strain in their friendship.

On New Year’s Eve, he comes into a party she had been brought to by friends Marie (Carrie Fisher) and Jess (Bruno Kirby) -and from which she was about to leave out of boredom and loneliness-, and confesses his love for her, and all the little things he loves about her personality. They make up and kiss.

Over the course of the movie, various segments of old couples who had been married for a while were depicted between certain scenes; the movie finishes with a segment of Harry and Sally, together and married, discussing the story of their relationship/friendship. 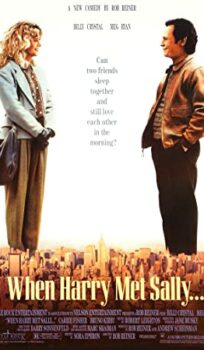