When the unlucky lottery losers revolt and try to take over the ‘ark’ spaceship just before launch, Dr. Hendron (Larry Keating) realizes that Stanton (John Hoyt) was right about mankind’s inherent selfishness, and rolls Stanton’s wheelchair away from the loading ramp, thus dooming them both. The ship launches successfully, Bellus collides with Earth (destroying both planets), and Zrya assumes Earth’s orbit, just as Hendron had predicted. The ship navigates through the planetary debris and lands on Zyra, where, miraculously, the atmosphere is perfectly breathable. Strangest of all: as the crew disembarks and admires the Zyran matte painting, uh, landscape, nobody even notices the obvious signs of an existing civilization on the horizon. See this article for a possible explanation.
Editor’s note: Evil Ed sent us his spoiler from the point-of-view of a lifelong George Pal fan, but we just had to inject a little 21st Century cynicism. Sorry, Ed! 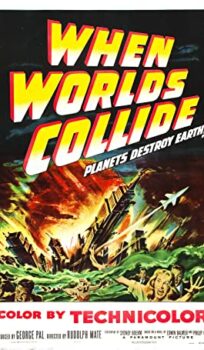