Thelma ‘Sister’ Husband (Stockard Channing) is killed during a tornado that wrecks her trailer.  She leaves all her money to Novalee (Natalie Portman), who uses it to build a nice house.

Novalee’s photography career begins to take off, and she becomes successful on her own.

Lexie’s (Ashley Judd) boyfriend turns out to be a child molester, and he comes after her two oldest children and beats Lexie.  Lexie ends up marrying the town’s exterminator, a very nice man who she falls in love with.

Novalee sleeps with Forney (James Frain), but when he tells her that he loves her, she lies and tells him that she doesn’t love him, because she thinks that he deserves better than her.

A chance meeting with the father of her child, Willy Jack (Dylan Bruno), who apologizes for deserting her and whose legs have been chopped off by a train, convinces Novalee to go after Forney, who has returned to Maine and college.  She tells him that she loves him, and they get married in the Wal-Mart where she had her baby. 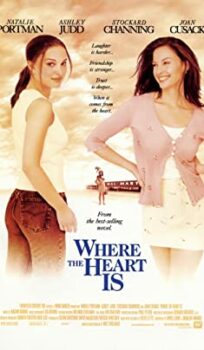