Seventeen year-old Kat Conner’s (Shailene Woodley) life changes one day when her mother disappears. Through many flashbacks, we see that the two of them never had a close relationship. Her mom (Eva Green) just seems very creepy and weird, most likely due to being in a loveless marriage with no hope of getting out. Kat is actually a little happy that her mom got out. Kat and her dad Brock (Christopher Meloni) move on with their lives.

During her 17th year, Kat began a relationship with the neighbor boy, Phil (Shiloh Fernandez). In flashbacks, we see her mom coming dangerously close to seducing Phil.

After her mom’s disappearance, Kat and Phil become distant. Kat starts falling for Detective Scieziesciez (Thomas Jane), the lead investigator on the case. He’s older, wiser, and they eventually get together, due to Kat’s seduction. He tells her that he thinks her dad is guilty, but there is not even enough evidence to do a search warrant

Kat continues to have dreams of her mom in a blizzard, calling out to her.

On a return home from college, she meets up with Phil, but he’s pretty distant with her. He mentions that Kat’s dad knows where her mom is.

Later that night in the basement with friends, Kat figures out that her mom must be in the chest freezer in the basement. As they begin to clear things off of it, they discover that it is locked. Just then her dad comes and demands that everyone leave.

The next morning, Kat sneaks back downstairs, opens the freezer, but there is only food inside.

Heading back to school, Kat and her dad say goodbye to each other at the airport.

In narration, Kat tells us that she never saw her dad again. He got drunk one night and confessed to the murder. He hung himself in the jail cell with a sheet. He actually had stored her in the freezer the whole time, but after Kat was getting close the night before, he took his wife’s dead body out and buried her.

The final scene is the big reveal.
In flashback, we see the mom coming home one day, walking into her bedroom where she discovers Kat’s dad, Brock, in bed with Phil. Phil runs out and the mom just laughs and laughs at Brock. To shut her up, he strangles her. 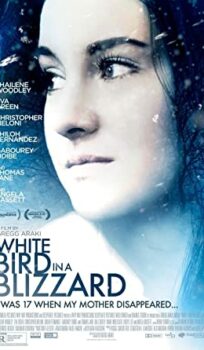