Pooper:
Bob and Phil successfully put on a show for General Waverly and find true love with Betty and Judy. It snows for Christmas.

Long Ending:
The film opens on Christmas at the front lines during World War 2. Captain Bob Wallace (Bing Crosby), who is an entertainer in his civilian life, sings the song “White Christmas” for the troops as bombs burst and bullets fly around the soldiers who are taking a brief respite from fighting for Christmas. Their Major General, Thomas Waverly (Dean Jagger) is being reassigned to a new command. His loyal troops, led by Bob, sing him a farewell song.

Later that day, Bob’s life is saved when another soldier named Phil Davis (Danny Kaye) throws him out of the way of a crumbling building (and is injured in the process). Bob visits the wounded Phil in the hospital and Phil asks him to read some music he’s written. A reluctant Bob, feeling beholden to Phil, agrees to form a musical duo with him after the war. The decision is fortuitous as they become a nationwide success. The two are best friends, despite Phil constantly milking his injury to get Bob to do what he wants. Phil eventually decides that Bob needs to find a wife because he works too hard and is not too happy (and finding Bob a wife would also allow Phil to get some free time).

The pair receive a letter from an old military buddy asking them to visit his sisters Betty (Rosemary Clooney) and Judy Haynes (Vera-Ellen, singing voice dubbed by Trudy Stevens), who are also entertainers (it is later revealed that Judy forged the letter to coax the stars to come see their show). They visit the sisters and Bob is immediately smitten with Betty but is too reserved to pursue her. Phil conspires with Judy, who would also like to see her lonely sister happy, to get the pair to date each other. They arrange a set of circumstances that force Phil and Bob follow the sisters up to an inn in Vermont where the Haynes sisters are to perform for the winter ski crowds.

When the four entertainers arrive in Vermont, they find that the weather is unseasonably warm. As a result, there are no skiers and the inn is practically empty. Bob and Phil are surprised to find that the inn is owned by General Waverly, who is retired and has sunk all of his life savings into the inn. Due to the lack of guests, the inn is about to go out of business and General Waverly will lose everything. At great personal expense, Bob and Phil bring their entire act from Florida to Vermont, hoping that their notoriety will attract a large crowd despite the weather. They also integrate the Haynes sisters into their act. Betty is truly touched at Bob and Phil’s gestures of kindness, and she and Bob eventually begin dating.

Bob learns that General Waverly has had a reinstatement request denied and feels old and useless. He calls up another military friend who is a TV executive and asks if he can go on TV to invite their fellow veterans to the inn to honor General Waverly’s service. The TV executive agrees, but also tries to convince Bob to exploit the General for free advertising by filming the show and highlighting the General’s misfortune. Though Bob refuses to go along with this, the innkeeper overhears the TV executive’s pitch and incorrectly assumes Bob will take him up on it (having had to hang up the phone she was listening on before the end of the conversation). Betty hears the rumor that Bob is attempting to exploit General Waverly and breaks off her budding romance with him.

Judy, who has fallen for Phil, mistakenly thinks that Betty has broken things off with Bob because she doesn’t want to leave Judy to fend for herself. Judy coaxes Phil into a fake engagement on the pretext that once Judy is engaged, Betty will rekindle things with Bob. However, Betty does not want to interfere with Judy’s relationship so she leaves Vermont to begin a solo career in New York. The recalcitrant pair then tell Bob about their meddling.

Bob goes to New York to send his message to his fellow troops and reaches out to Betty while there. Once she discovers that Bob’s intentions were always selfless, she secretly returns to Vermont. General Waverly is greatly surprised when he arrives at the show to find his entire contingent waiting to honor him. He expresses his deepest gratitude that his leadership meant something and that they have come together to save his inn.

Betty makes a surprise return to the show and gives Bob a gift that lets him know she still loves him. Bob and Betty kiss. Phil finally realizes he is in love with Judy and they also kiss. As the show comes to an end, it finally starts to snow. The entire audience join the four entertainers in singing the song White Christmas. 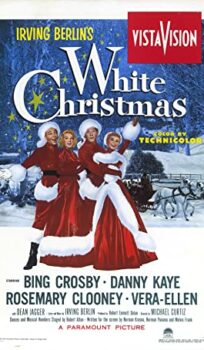