POOPER: (Thanks Curt!)
The killer is Judge Doom (Christopher Lloyd), a toon in disguise. He is trying to get Toontown condemned so he can buy the land cheap and then sell it for Freeway construction.

Long Ending:
In this film, animated characters (referred to as “Toons”) and flesh and blood humans co-exist. Roger Rabbit (voiced by Charles Fleischer) is a successful cartoon actor alongside his co-star, Baby Herman (voiced by Lou Hirsch). However, Roger has been in a bit of a funk lately. Studio head R.K. Maroon (Alan Tilvern) hires private eye Eddie Valiant (Bob Hoskins) to trail Roger’s wife Jessica Rabbit (voiced by Kathleen Turner). Maroon believes that Roger’s performance is inhibited by marital problems and that if Eddie can get evidence that Jessica is unfaithful, Roger will break up with her and rededicate himself to his craft. Eddie is reluctant to take the job as his brother was killed by a Toon. But since he is basically broke, Eddie accepts the job.

Eddie infiltrates a Toon bar (involving a great bit between Donald Duck and Daffy Duck, and also an appearance by Betty Boop) and locates Jessica. He takes pictures of Jessica (who is a Toon) in a compromising situation with a human named Marvin Acme (Stubby Kaye). Acme is fabulously wealthy and owns a property called Toon-Town where all the Toons live. When Eddie and Maroon show the pictures to Roger, he has a breakdown and storms out of Maroon’s office. That night, Eddie drinks himself into unconsciousness. When he awakens, he learns that Acme has been murdered by a Toon and that Roger is the main suspect.

While talking to police at the scene of the crime, Eddie meets an ambitious man named Judge Doom (Christopher Lloyd). Doom has developed a liquid substance called “dip” that can kill cartoon characters, a feat previously thought impossible. He intends to find Roger and execute him. Eddie is surprised when he returns to his office and finds Roger hiding there, proclaiming his innocence. Eventually, Eddie reluctantly decides to help Roger and hides the rabbit at his girlfriend Dolores’ (Joanna Cassidy) bar.

Eddie eventually suspects that Maroon is the true culprit. He confronts Maroon, who admits he’s part of a bigger scheme but didn’t know Acme would be killed. Before Maroon can say who he was working with, he is shot dead. When Eddie runs to the window, he sees Jessica Rabbit fleeing along with Roger. Eddie pursues them into Toon-Town. There, he meets Bugs Bunny and Mickey Mouse. Eddie is almost killed by an evil toon when he is saved by…. Jessica Rabbit. She explains that she is at the scene to get Roger (who she genuinely loves) and take him to safety (and only looked guilty by circumstance).

Jessica and Eddie are suddenly ambushed by Judge Doom’s goons. Roger follows the pair and tries unsuccessfully to rescue them, getting himself captured instead. Doom explains that he has been buying up all the land in the area to sell it at a huge profit so that a freeway can be built (and was working with Maroon on the scheme). He will then build businesses alongside the freeway to make even more money. The one thing standing in his way was Toon-Town, which is the land where the freeway will run through. After Acme refused to sell Toon-Town, Doom had Acme killed and framed Roger (Doom also killed Maroon). Doom then reveals a giant dip machine that he plans to use to erase Toon-Town from existence.

Roger and Jessica are tied up as Eddie faces off against and defeats Doom’s goons. Doom then reveals that he is secretly a Toon himself. Not only that, he is the Toon that killed Eddie’s brother. Doom gets the upper hand, but Eddie tricks him into smashing the container holding the dip. Doom painfully melts as Eddie frees Roger and Jessica. The other Toons arrive and we learn that Acme had a will that Roger used to write a love note to Jessica on. The will leave Toon-Town to the Toons forever, making sure their home will always be safe. Eddie embraces Dolores as the Toons sing a happy song. Porky Pig (“That’s all folks”) and Tinkerbell (with a wave of her wand) then bring the movie to a close. 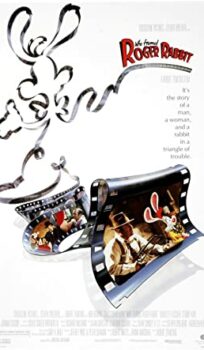