Pooper:
Herschel comes to terms with his role in Moses’ story and writes the 10 Commandments. In exchange, god says that someone, someday, will read his story. When Harvey and Zoey attempt to take the scroll of Herschel out of the cave, it disintegrates into dust, leaving them as the only ones to know of Herschel’s story.

Long Ending:
Harvey (Dudley Moore) goes on a trip to Israel to get over a recent breakup. He meets Zoey (Laraine Newman) on a group tour, and strikes up a friendship with her. Their tour group stops at the site where Jesus fasted in the desert for lunch. Zoey’s hat is blown away by a gust of wind. The pair chase it into a cave where they find an ancient scroll. Harvey, a linguistics professor, begins reading the scroll entitled “The Book of Herschel.”

The movie leaps back in time to follow the story of Herschel (also Dudley Moore). His father Hysop (James Coco), places him in a basket on the Nile river at the same time that Moses is also placed in a basket. While an Egyptian princess finds and adopts Moses, a family of idol carvers finds and adopts Herschel. Hysop sells himself to the idol-carving family as a slave to be near his son. Herschel grows up to become an expert idol carver. After he is almost killed by some marauders, however, he loses his faith in all the pagan gods and journeys off to find his fortune.

He becomes a fortune teller for the young pharaoh and Hysop also reveals that he is really Herschel’s father. They live happily together for awhile. But after too many of his “fortunes” are revealed to be bogus, Herschel is forced to flee into the desert to escape the wrath of the pharaoh. He eventually arrives in a community led by Jethro. Jethro’s oldest daughter is married to Moses. But he also has many other daughters, and Herschel ends up marrying Zerelda (also Laraine Newman), whom he had been smitten with from an earlier chance encounter. One day, he overhears god speaking with Moses and commanding Moses to free the Jews from Egypt. Unaware that god wasn’t talking to him, Herschel and Zerelda  set off to free the Jews.

Along the way, Herschel unsuccessfully fights a giant (ala David and Goliath), gets imprisoned in a salt mine where he is released by a drunken angel (Paul Sand), rescues Zerelda from New Sodom (where she was living as the giant’s girlfriend), watches as Zerelda is turned into a pillar of salt after she turns around to witness the destruction of New Sodom, and briefly meets the Devil (John Ritter), who isn’t actually that bad of a guy. Herschel finally makes his way to Egypt where he reunites with Hysop and gains an audience with the pharaoh (Richard Pryor). The pharaoh mocks Herschel and notes that Moses has already led the Jewish people to freedom. Herschel finally concedes he was not chosen by god for great things. The pharaoh then recognizes him as his former fortune teller and has him imprisoned. Herschel is freed by the drunken angel, and flees with Hysop an back to his home with Jethro.

Herschel arrives to find Moses and the Jews there. Herschel and Hysop end up devising the 10 Commandments and Herschel uses his skills as a former idol carver to carve them into stone tablets. Herschel then speaks with god, whereby Herschel argues that he should have gotten a chance to do more and that god should have taken a more active role in protecting Herschel. God convinces Herschel that he does act, through humans (i.e., he divinely inspired Herschel and Hysop to make the 10 Commandments), and that god’s power is too mighty to use on a whim. God then promises Herschel that somewhere, someday, someone will become aware of his role in history. Herschel finally seems content with his life.

Harvey finishes reading the scroll and he and Zoey attempt to take it out of the cave. As soon as they leave the cave, however, the scroll dissolves and blows away in the wind. They realize that they are the only ones who will ever know of Herschel’s story. It is implied the two will begin a relationship (thus, history repeating itself) as god’s voice chuckles in the background. 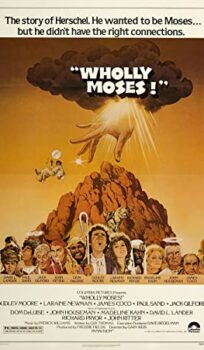