Harry’s (John Candy) employer Eliot (Jeffrey Jones) is the mastermind behind the kidnapping of Jennifer (Renee Coleman). He had long lusted for Helen (Annie Potts), the gold-digging wife of Jennifer’s father P.J. (Barry Corbin), but knowing that she would never get involved with him unless he has some wealth to his name, he hired Dwayne (Doug Steckler), a creepy animal trainer at the Simi Valley Game Farm, to kidnap Jennifer and hold her at the game farm before anonymously demanding a $10 million ransom from P.J. for her return, and once he got the money, he would use it to win Helen over (and Dwayne would get to rape Jennifer as his reward before she is released). He assigned Harry to investigate the kidnapping because he thought that Harry would never be able to trace the plot back to him, given how dimwitted he is.

However, Helen is unwittingly trying to ruin Eliot’s scheme with a plan of her own: She and her tennis coach Vince (Tim Thomerson) – who are having an affair that only P.J. is unaware of – have been spending the last six months trying to come up with the perfect plan to kill P.J. and get away with it so Helen can receive a hefty death settlement, after which they would flee the country and begin a new life somewhere else. Helen feels that the kidnapper(s) have jeopardized this plan, believing that they will milk P.J. for every cent he is worth before he gets Jennifer back, so she tells Vince that they will have to kill P.J. before he can pay the ransom. Unfortunately for them (but fortunately for Eliot), Harry eventually comes to believe that THEY are the kidnappers, thanks to him misinterpreting certain clues and scenarios as proof of this, and he also thinks that they have discovered that he is on to them and now want to kill him.

After Eliot learns of Helen’s affair with Vince through Harry, he follows her and Vince to the latter’s apartment one day and tricks Vince into leaving to go do a tennis lesson so he can go in and blackmail Helen into a sexual encounter. He succeeds, and through a movie he watches on Vince’s TV, he gets an idea to whisk Helen away to Buenos Aires once he gets the ransom money. However, he doesn’t know that Harry and Jennifer’s sister Nikki (Shawnee Smith) – who is assisting Harry in the case – are listening in through an air conditioning vent (though they think that he is Vince), and Harry blindly takes photos of him through the vent. That night, Eliot secretly delivers a new ransom note to P.J.’s mansion saying that he wants the $10 million by Friday, the day after tomorrow, but Helen gets a hold of it first in the morning and alters the due date to Monday so she and Vince can kill P.J. over the weekend. That same morning, Harry meets with Eliot and shows him the pictures he took, but after Eliot realizes that Harry didn’t check them out himself first, he takes advantage of his ignorance by not showing them to him. However, he temporarily loses his composure when Harry shows him the altered ransom note.

The next day, Harry, Eliot, P.J., Helen, and Detective Casey (Valri Bromfield) (who specializes in kidnapping cases and despises private investigators like Harry) are in P.J.’s mansion looking over the ransom money when Jennifer suddenly calls. She reads off a note written by Dwayne (obviously on orders from Eliot) saying that the kidnappers want the money today, and Harry must put the money into a suitcase and go to the Hollywood Park horse racetrack at noon and wait by the phones next to the jockeys’ entrance for a call, and he must not bring the police or else she will be killed. After ending the call, Dwayne tells Jennifer that they are going to the airport, and the next time we see them, he is keeping her tied up in a shed on the edge of the tarmac. After Casey shows Harry, Eliot, P.J., and Helen that a tracking device has been installed in the lining of the suitcase so they can find and catch the kidnappers, Helen excuses herself and calls Vince, telling him that they have a problem.

Harry dresses himself as a jockey and goes up to one of the phone booths with the suitcase as instructed, and Eliot calls it from afar and tells Harry in a fake voice that he must give the money to Eliot, then hangs up. Eliot then walks up to Harry and gets the suitcase, and after he goes, Nikki – who had figured that Harry might need her right now – appears and asks Harry what they must do now, and he replies that they will simply sit tight because, thanks to the tracking device, he and the police know where the kidnappers are going, plus the flight to Buenos Aires doesn’t leave until 4:00 p.m. As Eliot is driving along, he removes the tracking device from the suitcase and throws it onto the road, where it gets destroyed by a passing car. However, what he doesn’t know is that Helen and Vince are tailing him, intending to get the money from him before he can deliver it to the kidnappers. Eliot later stops at a dumpster in a secluded spot, where he empties the cash into another suitcase, then gets out and tosses the first one into the bin before driving away. Helen and Vince check the suitcase, thinking that Eliot left it in there for the kidnappers to find, but they discover that it is empty, after which they go back to Vince’s apartment defeated.

Eliot drives to the airport, and after changing his clothes there, he calls up Helen and tells her that he is Jennifer’s kidnapper, that he has the money, and he will soon be departing for Buenos Aires and wants her to come along. She readily agrees to join him, then sneaks out of the apartment and heads for the airport. When she meets up with him, she confesses that she was the one who changed his ransom note and that she has been trying to kill P.J. for his fortune, but then Vince appears moments later carrying a gun and aims it at Eliot, having overheard his earlier phone conversation with Helen. After he takes the suitcase from Eliot, Helen immediately turns on Eliot, then uses her feminine charms to win Vince back over after he questions her loyalty to him. Eliot then tries to reclaim the suitcase, but Vince dazes him by hitting him in the head with his gun. After that, he and Helen bring Eliot into a nearby maintenance closet, where they tape his mouth shut, tie him to a chair, and then use some chains in the room to suspend him from the ceiling. Helen then takes his plane tickets and boards the plane with Vince.

Harry and Nikki get to the airport and get out onto the tarmac just as the plane is heading for the runway, and they steal a mobile stairway and head after it, with Nikki driving and Harry riding on the top of the stairs. Along the way, Nikki causes a luggage cart driver to swerve to avoid her, which results in one of his carts coming loose and smashing against one of the walls of the very shed where Dwayne is keeping Jennifer. Because Dwayne was seated against that wall at the time, the impact throws him towards a nearby electrical control panel, which he accidentally sticks his cattle prod into and gets fatally electrocuted. Nikki drives the mobile stairway straight at the plane and gets it to stop, but she fails to hit the brakes before the top of the stairway can collide with the plane’s door, and Harry breaks it down with his own body. Thankfully unharmed, he walks up to Helen and Vince and attempts to arrest them for the kidnapping, but Vince gets up and pulls his gun out to keep him at bay. Harry responds by attempting to do some aikido moves, and he winds up kicking his boots off in the process, with one boot disarming Vince and the other smacking him in the face and knocking him out.

The plane returns to the terminal, and Helen and Vince are arrested and taken away. Jennifer is found and brought inside, where she reunites with Nikki, and when she thanks Harry for saving her, he informs her that she can thank Nikki for that as well, for she was a good partner. After Jennifer is taken aside by a policeman for questioning, Casey appears and gives Harry some begrudging respect, but then Harry hears Eliot making noises in the closet and gets inside with two other cops. He mocks Eliot for how he didn’t think he could rise to the challenge and figure it all out, and also tells Eliot that maybe, in front of these cops, he will finally give him credit where credit is due. This choice of words makes Eliot believe that Harry really did figure out that he was the kidnapper, so when Harry removes the tape from his mouth, he – out of sheer exasperation over Harry’s dumb luck – furiously admits that he was the one who committed the crime. Harry tells the cops to cuff Eliot while pretending that that was the conclusion he came to.

Harry replaces Eliot as president of the Crumb & Crumb Detective Agency, and one day, P.J. and Nikki visit him in his office, where P.J. presents him with a big paycheck for his efforts and tells him that he is forever in his debt. Nikki then extends an invitation to Harry to join her and her family for a vacation that they are taking to Hawaii, but Harry politely refuses, citing the responsibilities of his new job. He then hugs Nikki goodbye, and P.J. tells him that they will do lunch when he gets back. Harry soon goes into his office, where he gets a call from a gay club in San Francisco asking him to come investigate a murder there. He decides to take the case, and he is last shown leaving his office dressed in women’s clothes and makeup. 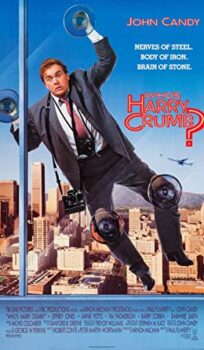