Pooper:
The Radicals are defeated. Taki and Makie appear willing to try and build a relationship and it is hinted that Makie is pregnant with Taki’s child. Taki is also reinstated as a member of the Black Guard.

The story takes place at the time for the renewal of the peace treaty. Though many Black World denizens are peaceful and support the humans, a demonic group of dissidents known as Radicals seek to prevent the treaty’s renewal. The Radicals would prefer to invade and take over the world.

A horny old man named Giuseppi Myart (voiced by Ichirô Nagai /Mike Reynolds) is a legend in both worlds. He is the key to negotiating a renewal of the peace treaty. Taki is assigned to guard him at all costs as the Radicals will likely attempt to assassinate him before the treaty renewal ceremony. Taki is partnered with a female operative from the Black World named Makie (voiced by Toshiko Fujita/Gaye Kruger). Though they are often wounded (and Makie molested), the duo manage to fend off several attacks by the Radicals. Despite the bodyguards’ efforts, Myart sneaks away to visit a brothel where he is severely injured by a Radical posing as a prostitute. The bodyguards save Myart in the nick of time and they begin rushing him to a psychic hospital. En route, they are attacked by a demonic parasite and Makie seemingly sacrifices her life to save the humans.

At the psychic hospital, the Radicals send a message revealing that Makie is still alive but being tortured by demons. Myart shows no sympathy and orders Taki to remain with him. Taki, having developed feelings for Makie, ignores his orders and drives off to save her. He rescues Makie and  the pair seemingly killing the remaining Radicals. When he and Makie return to the hospital, Makie is dismissed from her assignment and Taki is fired from the Black Guard. The two drive off to return to the city, not knowing that Myart is hiding the back seat of their car.

The leader of the Radicals resurrects himself and orders his last minion, a spider demon, to kill Makie and Taki. She sets a trap in the tunnel and succeeds in knocking out the former bodyguards. She is flaying the pair and on the verge of killing them when a lightning bolt unexpectedly strikes and kills her. Makie and Taki awaken alone in a church with their wounds healed. They admit they have feelings for each other and make love.

Myart enters the Church soon after and reveals that he set up the entire series of events. He notes that the humans and demons have been searching for centuries to find a demon and human who may be able to procreate (something previously thought to be impossible) and that Makie and Taki were prime candidates. Myart was in fact guarding them the entire time from the Radicals (who were actually trying to kill Makie and Taki). The ability of the two to conceive a child is key to renewing the peace treaty between the two worlds.

At that point, the leader of the Radicals attacks. Though Myart displays immense power, he cannot stop the leader. The leader gains the upper hand and is about to kill both Taki and Myart when Makie demonstrates new powers and easily destroys the leader.

Myart claims that Makie’s new powers are proof that she is pregnant with the first ever half-human/half-demon child. Taki claims that he is unsure whether he loves Makie, but she convinces him to give their relationship a chance. The peace treaty is signed and Taki is reinstated as an officer of the Black Guard 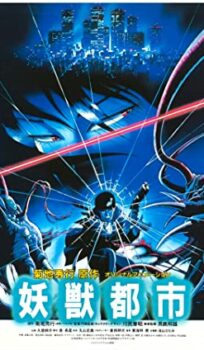