Four bank robbers are killed during a botched heist, leaving their wives with little means to support themselves. To make matters worse, Jamal Manning (Brian Tyree Henry), a candidate for alderman in Chicago, threatens Veronica Rawlings (Viola Davis), widow of the thieves’ leader Harry (Liam Neeson), into reclaiming $2 million that was stolen from him in the heist. Veronica contacts the other widows – Linda Perelli (Michelle Rodriguez), Alice Gunner (Elizabeth Debicki), and Amanda Nunn (Carrie Coon) – into joining her in the heist. Linda and Alice join, but Amanda doesn’t meet with them due to her newborn baby. Veronica goes by a notebook left behind by Harry for plans of the next heist. They also recruit Linda’s babysitter Belle as their getaway driver.

The ladies learn that the heist is set to be at the home of Jack Mulligan (Colin Farrell), who is running against Jamal for alderman. It also turns out that Harry faked his death and double-crossed his crew, having been tasked by Jack to steal from Jamal. Adding to this, he was having an affair with Amanda, and the baby is his.

The heist takes place after Veronica blackmails the CEO of the Mulligans’ security company into giving them codes to the safe. They steal the money but are nearly caught by Tom, Jack’s father. He shoots Alice, but Linda shoots and kills him. The money is then taken by Jamal’s brother Jatemme, but the ladies kill Jatemme and get the money back. Veronica is then faced by Harry, who plans to steal the money from her, but she shoots and kills him, then plants the gun used to kill Tom in his hand.

Jack wins by way of sympathy votes for Tom’s death. The ladies take their shares of the money to better their lives, though Veronica gives her share to help fund a library project in her late son’s memory. 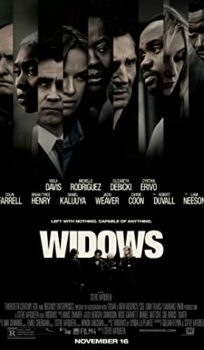