While Joel (Fran Kranz), Ben (Zachary Levi), and Wyatt (Kenan Thompson) are sleeping in a motel room a couple of days away from Los Angeles, Joel has a nightmare where he is harshly insulted by Dr. Dwayne (Darrell Hammond) and other people who have belittled and tormented him throughout his life. After he startles awake, he fully believes that Dr. Dwayne will just humiliate him again when he confronts him on his show, and it would be better for him to just go home. He thus writes a goodbye note for the still-sleeping Ben and Wyatt telling them as much, and adds that he has taken $300 to purchase a bus ticket. The next morning, the guys wake up and find the note, but just as they are about to go look for Joel, they get stopped by the three malevolent tofu truck-driving hippies, whom they had a confrontation with several days ago and who had stolen Wyatt’s treasured hot dog hood ornament off of his Wienerwagon.

Joel is then shown drunk in an alleyway, and he hallucinates being confronted by Drake Hanswald (Andy Milonakis), a bully from his youth. Drake takes him back to a time from said youth where he pulled his pants down in front of their fellow students, and before Joel could pull them back up, he farted and involuntarily defecated in his underwear, forcing him to run away while the students teased him. Joel then returns to reality and accepts that he needs to stop being such a wimp and start standing up for himself. He returns to the motel just as his tied-up friends are about to get a cattle branding from the hippies, and after he manages to free them, they beat up the hippies and knock them unconscious. Wyatt reclaims his hood ornament and puts it back on the Wienerwagon, and then they all drive off to Los Angeles, but not before tying up the hippies and leaving them hanging from their truck with hot dogs stuffed in their mouths.

The trio arrive at the studio where Dr. Dwayne films his show, but the guard at the front gate won’t let them pass through. After taking a few moments away to think about how they can get inside, Ben decides to distract the guard by eating a hot dog with him in a risqué manner, which will give Joel and Wyatt the chance to climb up onto the studio’s roof unseen using a grappling hook that they have. The plan works, and Joel and Wyatt get inside the building. Joel then gets onto the set of Dr. Dwayne’s show and punches him mercilessly until a security guard restrains him, and just as the gate guard brings in a cuffed Ben and Wyatt, Dr. Dwayne comes out of the set’s entryway. He explains that the Dr. Dwayne that Joel beat up was a decoy (also Darrell Hammond), and he put him on the set as a means of protecting himself after he had heard about the trio’s first attempt to get past the front gate. Joel complains to Dr. Dwayne about how his life has gone down the tubes and that it all started with him spurring his girlfriend to break up with him, but Dr. Dwayne replies that he deliberately engineered the breakup so he could be motivated to face his fears and make something of himself. After thinking about it, Joel realizes that what Dr. Dwayne did really was for the best after all, and they hug.

Dwayne then turns his attention to Wyatt and brings out Cornelius Worthington III (John Farley), whom Wyatt recognizes as a junkie that he had given one of his free hot dogs to, but he is now all cleaned up and sober. He thanks Wyatt for saving him from his drug addiction by giving him a free hot dog and a smile, and since he is actually a rich man, he wants to repay Wyatt by financing Wyatt’s Wieners, and Wyatt happily accepts. Dr. Dwayne then speaks with Ben, and he spurs Ben to publicly accept that he is homosexual (which had been hinted at throughout the movie). Later, as the guys are leaving the lot, the decoy throws an egg at Joel, but he retreats after Joel makes a threatening motion at him. Joel takes joy in the fact that somebody fears him for a change, and then he and his friends hop into the Wienerwagon and head home.

The closing texts reveal what became of the trio: 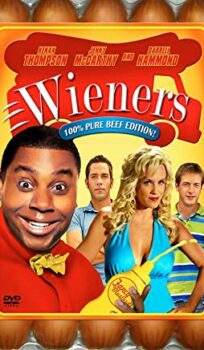