POOPER: (Thanks Curt)
“Slugworth” was working for Wonka all along. It was a ruse to weed out the bad kids, and Charlie passes the test when he gives back the Everlasting Gobstopper.

LONG ENDING:
Willy Wonka (Gene Wilder) is a legendary confectioner whose inventions blew all competitors out of the water. Due to corporate espionage, Wonka shut down his factory for a number of years. However, the factory has recently reopened and Wonka puts out a promotion that he has hidden five golden tickets in five random candy bars. Those who find the tickets will get to tour his factory and receive a lifetime supply of chocolate. The tickets are eventually found by five children – Augustus Gloop (Michael Bolner), who comes from a family of gluttons; Veruca Salt (Julie Dawn Cole), an incredibly spoiled and selfish rich girl; Violet Beauregarde (Denise Nickerson), a girl obsessed with chewing gum; Mike Teevee (Paris Themmen), a boy obsessed with watching (ahem) TV; and Charlie Bucket (Peter Ostrum), a kind-hearted kid from a very poor household. Before the day of the tour arrives, a Wonka competitor named Slugworth approaches each child and promises to pay them handsomely if they steal a new Wonka invention called the Everlasting Gobstopper for him.

The kids enter the factory along with one chaperone each. After signing a contract and promising to obey any rules given by Wonka, they walk into his sugar-coated wonderland. They learn that Wonka’s confections are made by Orange-skinned, Green-haired creatures called Oompa Loompahs that Wonka saved from extinction. They are completely trustworthy and morally upstanding. Wonka also gives each child a prototype Gobstopper.

Each child ends up breaking the rules, which results in most of them being incapacitated. Specifically: Augustus falls in a chocolate river while greedily slurping up the chocolate therefrom and is sucked up a drainpipe; Violet eats a prototype gum that turns her into a human blueberry; Veruca throws a fit about wanting to own everything in the factory and accidentally falls down a garbage chute, and Mike shrinks himself when he jumps into a laser beam that Wonka created to broadcast chocolate directly to consumers through their television sets. Each time a child is eliminated from the tour, the Oompah Loompahs sing a song chiding them for their misbehavior. Charlie and his Grandpa Joe (Jack Albertson) also are not immune from rulebreaking as they drink a prototype carbonated drink against Wonka’s wishes. The drink makes them float and they are almost cut in pieces by a gigantic ceiling fan. But they realize that burping expels the gas and are able to float safely down to the floor.

At the end, Wonka tells Charlie that all the kids will survive their experience and hopefully think twice before being poorly behaved in the future. He also berates Charlie for breaking the rules, stripping Charlie of his award of a lifetime supply of chocolate. Grandpa Joe tells Charlie to give the Gobstopper to Slugworth since Wonka treated them so poorly. Charlie however apologizes to Wonka and returns the Gobstopper to him.

Wonka is thrilled that Charlie showed true moral fortitude and reveals that this promotion was all designed to help him identify someone to take over for him. He even hired Slugworth to make the offer to the children as a final test. Because Charlie was loyal to Wonka and proved himself trustworthy and upstanding, the confectioner reveals that Charlie will be his successor. Charlie and his whole family are invited to move into the factory where they will never want for anything again. The movie ends with Wonka, Grandpa Joe, and Charlie flying through the air inside a Wonkavator (an elevator that can move in any direction and even fly). 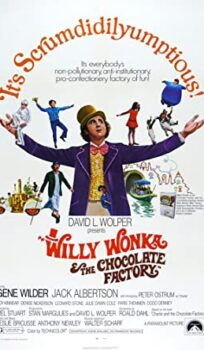