Lin McAdam (James Stewart) finally catches up with and exacts revenge on Dutch Henry Brown (Stephen McNally) for killing their father. Yes, you read that right. “Dutch Henry’s” real name is Matthew McAdam. Lin retrieves the prize Winchester repeating rifle stolen in the opening scene without realizing that the gun had been through an odyssey of its own*.

*The rifle, stolen by Brown, is traded for an assortment of inferior weapons to Joe Lamont (John McIntyre) when Brown’s gang threatens to revolt over having to face the long journey to Tascosa without guns of their own. Lamont is murdered by Indian chief Young Bull (Rock Hudson) when he refuses to offer it to Young Bull’s war party. As the Indians charge a small, isolated Cavalry group, Young Bull is shot out of the saddle by Lin McAdam, who later rides right past the Winchester lying in the dirt. The rifle is recovered by Cavalry trooper Doan (Tony Curtis), and given by Sgt. Wilkes (Jay C. Flippen) to Steve Miller (Charles Drake). Miller is killed for the gun by Waco Johnny Dean (Dan Duryea), who is riding to meet up with the rest of the gang led by Dutch Henry Brown. Brown forces Dean to give the Winchester back to him as the gang prepares to rob the bank in Tascosa. Lin breaks up the robbery attempt, chases Brown up a mountain, and retrieves the Winchester after killing Brown. The viewer is left hoping that Lin manages to return to Dodge City and accept Wyatt Earp’s (Will Geer’s) offer to get his name engraved in the stock. 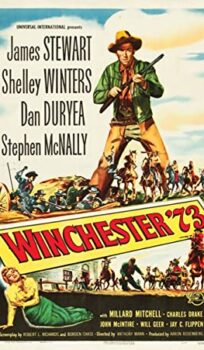