SHORT VERSION:
Jim finds out that the spirit who has been terrorizing Linda and killing his friends is the spirit of Carlos Malfeitor, a murderer who died many years ago and whose home became the apartment that Jim and Linda live in.

When he returns to the apartment after getting this information, he finds that Malfeitor has taken possession of Linda, and he quickly gets into a brawl with him/her. Lieutenant Dewhurst appears during this with gun drawn looking to arrest Jim, since he believes him to be responsible for the murders Malfeitor committed, but Linda/Malfeitor knocks him out. Jim grabs his gun and aims it at Linda/Malfeitor, but Malfeitor then speaks and says that he (Jim) was always his portal, not the Ouija board, and he will possess Linda for as long as he lives and goads him to shoot himself and close the portal. However, Linda comes through for a moment and begs him not to, so he unloads the gun into the Ouija board. This proves to be the thing keeping Malfeitor around after all, since he leaves Linda and goes back to where he came from.

Jim and Linda later get married, but the ending hints that Malfeitor may not have been completely vanquished.

LONG VERSION:
While Linda (Tawny Kitaen) is at a hospital recuperating following a supposed attack from the spirit of David, Jim (Todd Allen) and Brandon (Stephen Nichols) go to the lake up in Big Bear where David drowned and contact his spirit through another Ouija board they purchase from a local occult shop. They learn from him that an evil spirit named Malfeitor (a spirit that the medium Zarabeth [Kathleen Wilhoite] had mentioned to Brandon after she conducted a séance at Jim and Linda’s apartment earlier on) was really the one who killed Lloyd (James W. Quinn) and Zarabeth and is the one terrorizing Linda, and Malfeitor is right there with them now. Malfeitor’s spirit then attacks them and kills Brandon.

During this, Linda checks out of the hospital and returns to the apartment, and that night, she gets the Ouija board out of a hiding place and tries to contact “David” to find out what has become of Jim, but she gets no response. Jim goes back to the occult shop and asks the owner about Malfeitor, so she opens up a book and shows him that Malfeitor is the surname of Carlos Malfeitor (J.P. Luebsen), a man who murdered nine people with an axe, which is the same weapon that played a part in all of the deaths throughout the film. He was gunned down by police in his own home in 1930, and his home has become the apartment building that Jim and Linda now live in. Jim tries to call Linda at the hospital, but after learning that she has checked out, he hurries home. Meanwhile, Malfeitor attacks Linda again, but this time he possesses her.

Jim arrives the next morning to find the apartment in complete disarray, and Linda – now wearing men’s clothes and speaking in a voice that sounds like hers and Malfeitor’s combined – soon appears swinging an axe at him. As Jim brawls with her, Lieutenant Dewhurst (Burke Byrnes) – the detective who suspects Jim of having committed the murders – appears with gun drawn ready to collar Jim. Linda/Malfeitor quickly knocks out Dewhurst, but Jim grabs his gun and aims it at Linda/Malfeitor, seemingly ready to shoot her/him. Malfeitor tells him that he (Jim) has always been his portal, not Linda, and he has truly been terrorizing him by torturing Linda and killing his friends, and he will possess her for as long as he lives. He goads Jim to shoot himself and therefore close the portal, but as Jim puts the gun to his head, Linda comes back for a quick second and begs him not to, so he unloads the gun into the Ouija board. Linda/Malfeitor moves towards him looking to strangle him, but soon collapses, indicating that Malfeitor’s portal really was the Ouija board. However, Linda’s falling body accidentally pushes Jim out of the window onto a car below.

The next scene shows that Linda had been freed from Malfeitor’s possession after the Ouija board’s destruction and Jim only sustained a broken neck in the fall, for they have gotten married. As their landlady Mrs. Moses (Rose Marie) and a helper are cleaning up the wrecked apartment, they find the hole-filled Ouija board. Mrs. Moses wonders aloud if it still works, and after they toss the board and its planchette into a box, the planchette moves to the “yes” space on the board all by itself… 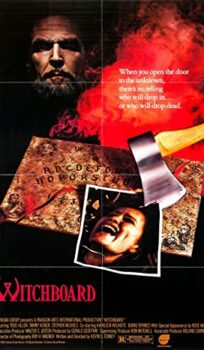