The film is based on the notorious disappearance, in 1978, of then-6-year-old Etan Patz, who, unfortunately, unlike his cinematic counterpart, was never found and, based on a man being convicted in 2017 of the kid’s alleged strangling, is considered dead.

Short pooper:
One year after his disappearance, Alex (Danny Corkill) is found, safe and sound, and reunited with his mother Susan (Kate Nelligan).

Longer version:
While time has passed, everyone -except for Susan- have all but given up on any hopes of Alex being alive, let alone being found, and the trial against Philippe (Keith McDermott) -Susan’s former housecleaner, who still claims to be innocent- seems to be on its way, an unexpected break suddenly happens: Lt. Manetti (Judd Hirsch), the lead investigator of the case, gets a phone call from a Malvina Robbins (Louise Stubbs), who claims “Alex is alive and lives with one of her neighbours”; however, the Police Department dismisses the importance of the call.

Yet, driven by a perpetual “what if” feeling, Manetti takes his son for a drive and they both go to Bridgeport, Connecticut, to check on the lead, but still fearing it might be a false flag and that he will have to berate the woman for interfering with the investigation. He is surprised to notice a blue Chevy in the parkway of Robbins’ neighbours’ house -JUST LIKE IT HAD BEEN SAID SINCE THE BEGINNING-, goes to Robbins’ house and, from her phone, contacts the local Police. Shortly after, the house next door is searched and Alex is found alive and well. The kidnapper confesses having done it “so the boy could take care of a disabled relative”.

The news gets out and a growing contingent of police gathers for the escorting of Alex back to New York; at the same time, the media gathers in front of Susan’s house. As Susan returns from buying groceries, Menetti arrives with Alex. The film ends with mother and son joyfully reuniting at the delighted sight of everyone present and the personal satisfaction of the determined Detective, who always supported the beleaguered mother in her hopeful search and never gave up 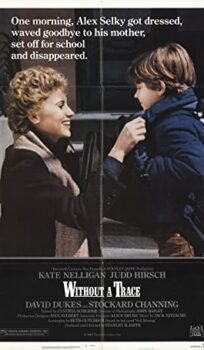