In an attempt to get Grimsley (Peter Stormare), his security chief Duvall (Eric Roberts), and the crooked FBI agent Bodi (Yaphet Kotto) off her back so she and Larry (Larry the Cable Guy) can reach Chicago, Madeleine (Ivana Milicevic) decides to have Larry stage her death. First, they blow up his truck to make it seem like she died in the explosion, then they go to a funeral parlor owned by his brother-in-law, Rondog (Joe Mantegna), where he sets up a funeral for her before sedating her with a Botox injection to give her the appearance of being dead. Rondog then invites Grimsley, Duvall, and Bodi to her “funeral”, and after checking her over (along with Larry himself “proving” her death by slapping her around), the men are convinced that she has kicked the bucket. After they take their leave, Rondog revives her with an antidote.

Larry and Madeleine get to Chicago, and after checking into a hotel room, Larry reads a newspaper article stating that Grimsley is hosting a charity polo match, and the winning team will receive an invitation to the Summer Solstice Ball at his mansion. Larry decides to participate, figuring that winning and going to the ball will be his best chance to get his hands on the disk Grimsley has that contains information on the money he stole and access codes to his numbered accounts in Switzerland. Madeleine tells him that she is coming with him incognito, but Larry shoots down that idea, and after she insults his abilities as an officer of the law, Larry handcuffs her in the bathroom and departs for the polo match. She later manages to pick the lock on the cuffs and goes to the contest in disguise. Against all odds, Larry manages to win the match for his team, but Grimsley denies him the prize. However, he changes his mind when Larry drops a hint to him suggesting that he has the code key to his accounts’ access codes, and Madeleine then lets Larry know of her presence without giving her identity away. After Larry leaves with her, Grimsley tells Duvall and Bodi that Larry is falling right into their trap.

The incognito Madeleine accompanies Larry to the ball, and when Larry asks her where the code key is, she points out that it is inscribed on her cigarette lighter. As Madeleine keeps Grimsley occupied, Larry goes snooping around the mansion for the disk. However, he soon runs into Duvall and has a fight with him, and around the same time, Grimsley lets Madeleine know that he has seen through her disguise. He tells her that, without physical evidence of his crimes, there is nothing she can say on the witness stand that will be believed, but she says she has the code key. He tries to convince her to turn it over to him in exchange for letting her have half of everything he owns, but she refuses. Meanwhile, Larry knocks out Duvall, then he searches through his Blackberry for information and discovers that the disk is in a safe in Grimsley’s office on the second floor, plus he gets the combination for it. Larry finds the safe and opens it, but just after grabbing the disk, he is confronted by Bodi and his men. Fortunately, Larry cuts a deal with Bodi where, in exchange for being let go, Bodi can help himself to the money and jewelry in the safe. Larry then comes up to Grimsley, who proceeds to hold Madeleine tight to him, and after Larry realizes that Grimsley saw through her disguise, he blabs that the code key is on the lighter. He then offers Grimsley the disk in return for Madeleine, and after they make the swap, he and Madeleine run away. However, as they are escaping, Larry shows Madeleine that he still has the disk, and we find out that he had given Grimsley a blank DVD recording of himself wearing a Billy Ray Cyrus wig and singing “Achy Breaky Heart.”

The next day, Larry and Madeleine show up at the courthouse, and Larry hands the disk over to Madeleine’s lawyer Mark (Kurt Naebig). He informs Mark that Grimsley has the code key, but Mark assures him that that won’t be a problem because he and his team have a copy of it that they kept separate from the evidence locker. After Grimsley makes his arrival in a prison uniform and handcuffs, Mark tells Larry that he could give him his dream job of being an FBI agent, but Larry turns it down, saying he is a small-town boy at heart (though he truly was turned off by the corruption within the Bureau, as his dealings with Bodi have proven). Larry and Madeleine bid each other a fond farewell, and Larry returns to his hometown, succeeds Smoot (Richard Bull) as Sheriff, and gets a big kiss from Connie (Jenny McCarthy). 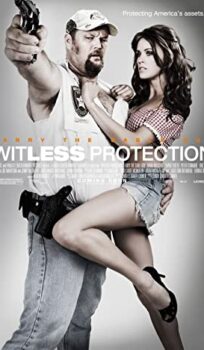