The gooood, nature-protecting, pixie-loving wizard Avatar (voice of Bob Holt) finally catches up with his eeeevil, technology-loving, machine-obsessed brother Blackwolf (voice of Steve Gravers), and shoots him dead with a pistol.

(Aside: a decade after seeing “Wizards,” your editor still can’t tell if this irony was the result of intent or ignorance on the part of director Ralph Bakshi. If it was intentional, then this is a brilliant bit of cinema that uses the tools of physical appearance and point-of-view characterization to trick us, the audience, into empathy with the cruel yet beautiful oppressors. He presents an Eloi-vs-Morlocks style conflict in which the “Eloi” are the actual cause of the “Morlocks'” suffering. If Mr. Bakshi wasn’t fully aware of the statement he was making, then this is a rather pathetic movie, in which a particularly American style of imperialism is so prevalent and subtle that an example can be invisible to even its creator. Think about it, won’t you?) 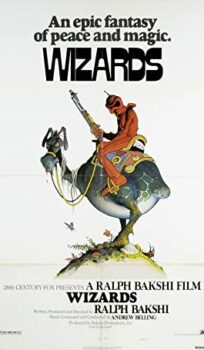