The Twin Towers and the urban decay of New York in the early 1980’s serve as the backdrop to this unconventional horror film that’s worth a look for its eclectic cast which includes Gregory Hines as a forensic pathologist, Tom Noonan as an existential zoologist and a young Edward James Olmos as a Native American ironworker that knows all about the Wolfen and enjoys pretending to be one of them by running around the waterfront stark naked while under the influence of peyote!

After the Wolfen bite the hand and head off of Inspector Warren (Dick O’ Neill) outside of Federal Hall, Detective Dewey Wilson (a haggard Albert Finney) and police psychologist Rebecca Neff (Diane Venora) retreat to the high rise office of real estate mogul Christopher Van Der Veer, whom the Wolfen murdered at the start of the movie because he was going to develop their blight-stricken South Bronx hunting ground.

The Wolfen appear in the penthouse, but Dewey destroys the table-top model of the planned real estate development in front of them, symbolizing that the Wolfen’s territory will not be encroached upon.

The Wolfen pack vanishes from the penthouse and presumably returns to their territory, never to be heard from again. 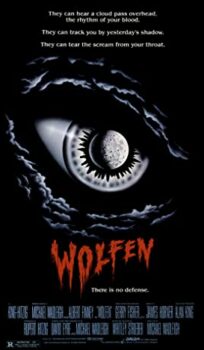