Women on the Verge of a Nervous Breakdown(1988)

A great deal of crazy, screwball situations pile up on top of one another, parting from the moment when Carlos (Antonio Banderas) serves the drugged Gazpacho to everyone present in the apartment:

The cops and the technician -who showed up at the apartment, respectively: in response to the phone call made by Carlos about the alleged terrorist hijacking plan by the Shiites; and to fix the phone after Pepa (Carmen Maura) broke it again, following Ivan’s (Fernando Guillen) message- are knocked out after drinking the Gazpacho. And so are Carlos and Candela (Maria Barranco), Pepa’s suicidal friend. However, Candela does not commit suicide, but her fate is left unknown.

After Lucia (Maria Barranco), Carlos’ mother, holds Pepa at gunpoint, she confesses still not being mentally well from Ivan’s betrayal and throws the rest of the Gazpacho to Pepa’s face, planning to run off to the airport and kill Ivan before he boards the plane heading to Stockholm with his new lover, Paulina (Kiti Manver).

Pepa figures out the flight to Stockholm must be the one targeted for the intended hijacking by the Shiites. Both Pepa and Lucia find themselves in a chaotic taxicab chase -Pepa going after Lucia-, towards the airport, each woman aiming to catch up with Ivan first.

Once they both reach the airport, Lucia aims the gun at Ivan and Paulina, but Pepa stops her in time and faints again.

Ivan sees this, realizes how poorly he has treated Pepa, comes to assist her, and offers to make it up to her; however, she refuses and leaves him.

Upon returning to her place, currently upside down from the madness that happened throughout the film, Pepa sees Marisa (Rossy De Palma) waking up from the daze induced by the Gazpacho; she sits down by her, they have a calm chat -with a strong inference of Pepa having romantic feelings for Marisa- and one big final revelation comes to light, shortly before the film ends: PEPA IS PREGNANT WITH IVAN’S CHILD. 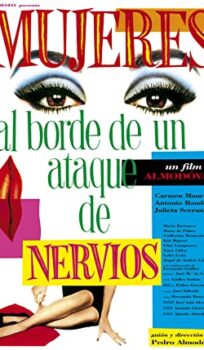