After June accidentally loses the blueprint piece that her mother wrote her name on, survives another attack from the Chimpanzombies, and then makes it through Fireworks Falls while getting separated from Greta, Boomer, Steve, Gus, and Cooper, she finds herself walking along the bottom of a chasm until she falls through some rotten wooden boards down into Zero-G Land. As she floats around in it, she comes across a hidden house made of balloons, and she peeks in through the door and discovers that the missing Peanut is living in it.

After getting his attention, he quickly takes her inside, and she finds out that he has been living a reclusive existence here ever since he barely managed to escape a Chimpanzombie attack while attempting to restart Clockwork Swings by hand (Clockwork Swings puts the life into Wonderland, and he couldn’t use his magical marker to do the job because it lost its power), and he tells June that he has no intention of ever leaving this place. She tells him that he can’t stay in here forever, then notices his magical marker and tries to spur him to take it up and use it in his usual manner, but Peanut informs her that it doesn’t work anymore. She tries to remind him that all these amazing things in Wonderland came from him, but he informs her that he was just the middleman; the ideas and the inspiration came from a woman’s voice who whispered in his ear. After hearing this, and through her and Peanut going over the story behind the disappearance of that voice, how he felt lost without it, and the emergence and takeover of the Darkness, June realizes that her mother was the one who was inspiring him and that the presence of the Darkness in Wonderland is her own fault, created through her cynicism over her mother’s illness (strongly implied to be cancer) and losing her imagination due to it. Just as she is about to tell Peanut about this, he hears a strange noise outside and says that they have to go. When they get outside, they see an army of Chimpanzombies heading their way, and Peanut tells June that they must have followed her here. While trying to avoid the Chimpanzombies, June does her best to keep Peanut’s magical marker in her possession and succeeds, but Peanut is unable to fight off the malevolent dolls. After the Chimpanzombie army surrounds them, Peanut throws June towards an exit so she can reach safety, and June watches as the Chimpanzombies swarm him and take him away.

June meets up with the five other animals and informs them that Peanut is alive, but the Chimpanzombies got him and are carrying him into the Darkness. Steve says that they must get him, but Greta informs them that they need to rebuild the bridge across the ravine (which Fireworks Falls flows down into and also separates them from the section of the park that the Darkness hovers over). June says that, if something bad were to happen to Peanut, she couldn’t live with herself, which spurs a now-curious Greta to ask her what she means by that. June admits that she is to blame for the Darkness being in Wonderland, saying that it took over her due to her fear (of losing her mother), and though she tried to carry on, she eventually stopped caring about the park. She tries to move past that by directing everyone’s focus back onto fixing the damage, and she shows them the magical marker and says that, if they can find a way to cross the ravine and put it back in Peanut’s hands, they can get Clockwork Swings up and running. However, the animals are angry with her for bringing the Darkness here, and they all shun her, resolving to figure out how to fix the park on their own.

June looks out over the ruined park, and as she cries and apologizes to her mother, the blueprint piece suddenly flies up to her, and she remembers the time her mother told her that she is the wonder in Wonderland. After looking at Peanut’s marker, she tries to think of how to create a passage across the ravine, then notices the SkyFlinger nearby. She climbs into it and uses her imagination to figure out how to fix it and turn it into a mobile machine, and she then uses it to repair the rollercoaster and put a track over the ravine. The animals take notice of this and are pleasantly surprised, and after she finishes, June comes down to them and says that it is time for them to bring Wonderland back to life. When Greta asks how she knows that this will work, June replies that she and her mother built this place. She then explains that her mother had to stop when she fell ill, and she became so scared of losing her that she lost herself, and her mother would hate to see what both she and the park have become. She then declares that they are going to ride the rollercoaster-like the wind, and the animals pledge their support to her.

June and the animals take the rollercoaster over to the other side and spot Peanut getting sucked up into the Darkness. As the animals are fretting over what to do next, June looks at the magic marker and tells them that she alone needs to go into the Darkness and bring Peanut back. Greta warns her that the Darkness is too powerful and nothing that goes into it ever comes out, but June assures her that she can do this. After getting drawn up into the vortex, June finds Peanut and frees him, then tells him that he has to get them out. He replies that, while he wishes he could, his inspiration has left him and she is never coming back. June tells him that he doesn’t know that and she is trying to get back to them, and she enlightens Peanut to the fact that his inspiration has been coming from her mother before telling him that she knows that her mother is not going to give up, so neither should they. She soon gives him the marker and says that he doesn’t have to worry about relying on her mother for inspiration anymore because she is here. She then whispers in his ear to make a giant slide out of bendy straws, causing his inspiration to return and the marker to regain its power.

He makes the slide, which they use to escape the Darkness, and on their way to Clockwork Swings, they collect the rest of the animals just as the Chimpanzombies are about to gang up on them. As Peanut wonders how they are going to jumpstart the clocks, June looks at her blueprint piece and notices that her mother wrote her name around the gears, which gives her the idea to have Peanut manipulate the slide around them in that fashion and then have the slide turn them. Also, as they all go along, Steve finally confesses to Greta that he is attracted to her, and he is happily surprised to find out that she thinks he is cute, too. June then tells Peanut what he must do, but as he is working on it, the Darkness (through several trails of smoke) and the Chimpanzombies try to put a stop to him. The other animals thus get out of the slide and lay waste to the Chimpanzombies, and Peanut finishes the slide and uses the magic in his marker to make it turn the gears. Clockwork Swings is activated, and a tower of light shoots out of it up into the Darkness and wipes it out. The park then returns to its former splendor, the guests instantly come back, and the Chimpanzombies change back to being friendly WonderChimps.

After June and the others ride the slide down to the park’s entrance, the animals are ready to spread some wonder again, but June tells them that she is going to return home now. When Boomer asks what they are going to do without her, she replies that they will do what they always do, then has them all join her in chanting “We are the wonder in Wonderland!” As the animals get back into their regular routines, Greta points out to June that the Darkness – while now a colorful but smaller cloud – is still up in its place in their sky, and June tells her that maybe it is meant to stay there to serve as a reminder to keep their imaginations alive. June then encourages Greta to go to Steve, and Greta kisses him. Peanut then appears, and after he returns June’s backpack to her, she tells him that he will hear her in the wind, and he replies that they will be here for her, always. June exits the park and finds herself back in the forest outside of town again, and she looks back to see the entrance magically disappearing.

June hurries home and hugs her father, and she finds out that little time has passed in the real world while she was in Wonderland. She then digs out her Wonderland paraphernalia and gets to work on recreating the park’s blueprint, using the piece she has as a starting point. Sometime later, June has created a highly detailed miniature version of the park in her backyard, which is enjoyed by both adults and children. One day, just before going out to welcome people back for another day at Wonderland, she gets surprised at her front door by her mother, now cured of her illness. Overjoyed, the two have a big hug, and June tells her that she has a story for her that even she might not believe. June ends the movie by asking the kids what they should have for a new ride, and after combining a few suggestions, she whispers the ride into the ear of her Peanut doll, which Peanut hears and immediately gets to work on creating. 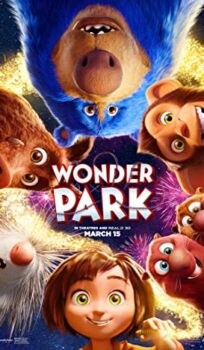