Auggie Pullman was born with a facial deformity. He has been homeschooled his whole life until his parents decide he is ready to attend school with other children. He is initially feared and ridiculed for his appearance, but other kids, including Jack Will and Summer, see what a great kid Auggie is.

Auggie endures a number of issues, including a bully named Julian, kids saying he has “the Plague”, and the death of his dog Daisy. However, Auggie’s bravery, charm, and wit win over the other students.

Auggie is awarded a medal at the end of the school year to acknowledge his great work as a student and as a person. 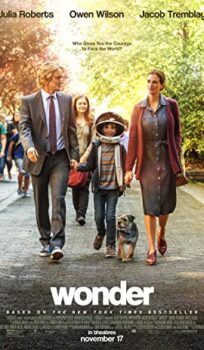