After Woo (Jada Pinkett Smith) and Tim (Tommy Davidson) spend their blind date experiencing one bad situation after another, culminating with Tim’s car getting stolen and him being unable to properly file a report about it at the police station, an exasperated Tim tells Woo that he is going home. She tells him that she blames his uptight nature for getting them into all of the messes they’ve gotten into tonight, and he retorts that their misfortunes have been caused by her ego, for she has been called “fine” for so long that she has bought into her own hype. Woo walks out of the station and catches a cab, and afterward, Tim experiences a vision of his conscience in the form of Billy Dee Williams (himself). He tells Tim that he knows that he really wants to go after Woo and then asks him why he isn’t doing so, and Tim answers that he can’t be bothered to worry about her because he has enough problems right now. Billy Dee suggests to him that he spend a little time with her, check her out, and find out what motivates her because she might be the beginning of something spectacularly beautiful in his life.

Woo goes to a nightclub with a mostly drag queen clientele to meet with her friend Celestrial (Girlina), who told her her fortune earlier that day and said that she would find love tonight. As she goes in, she notices that Tim’s chauvinistic horndog friends Frankie (Duane Martin), Hop (Darrel Heath), and Romaine (Michael Ralph) are trying to get inside, and clearly seeing that they are unaware that most of the “women” in this club are actually men, she has the doorwoman grant them access in the hope that they will try to get real close and personal with at least one of the drag queens (Frankie and Romaine quickly wise up to the situation and avoid doing anything with any of the drag queens, but Hop never catches on and winds up making out with several of them, and it is only after he does this that his friends enlighten him to the true gender of the “ladies”, leaving him deeply horrified and disgusted). Woo finds Celestrial and tells him all about her disastrous date with Tim, and Celestrial points out to her that Tim showed good character through it all and sounds like a winner compared to the wretched lowlifes she has been with in the past, and he asks Woo if she even took the time to notice. Woo departs shortly afterward, but on the cab ride back home, she finds herself thinking about Tim and ultimately tells the cab driver to drive around Brooklyn until they find him.

Woo spots Tim standing near a subway entrance following a mugging he sustained on the subway, and she offers him a lift. As they ride together, the cab driver informs Tim that Woo has been looking all over for him in this cab, and Woo then asks Tim to forgive her for both her attitude problem and for not appreciating him. He forgives her, and after he does, she asks him to make one more stop with her. Not long after, she has the taxi stop at Shakim’s (Dartanyan Edmonds) party and tells Tim to stay put, then gets out and goes up to Shakim and starts arguing with him, causing a woman he is dancing with to step in and get confrontational with her. Woo soon defuses the tensions by telling Shakim that she is truly happy for him and this woman and she is sorry for not understanding either of them, and she realizes that, no matter where you find love or who gives it to you, it’s a good thing. She then hugs both Shakim and the woman, after which Tim – having exited the cab after wondering what was keeping Woo and having now seen her hug Shakim – gets in Shakim’s and Woo’s faces, thinking that Shakim is an ex-boyfriend of Woo’s that she is trying to reconcile with. However, Woo informs him that Shakim is actually her brother, and the woman that he has been dancing with is his fiancée. After Shakim and his fiancée walk off to dance to their favorite song, Woo thanks Tim for opening her eyes, and he tells her that he needs her to do something for him, stating that he is about to make some things happen.

They get back in the taxi and have the driver take them to the apartment building of Tim’s ex-girlfriend Denise (Tiffany Hall), whom Tim had co-signed the lease with on a car that she wound up keeping. Having decided to steal the car back (which is parked out in front of the building), Tim and Woo bribe the cabbie to fork over his slim jim so Tim can use it for popping open the lock on the driver’s side door. However, as he attempts to do so while Woo keeps a lookout from the taxi, he accidentally triggers the car’s alarm. Tim hides himself from view as Denise steps out of the apartment to investigate the noise, and just after Woo exits the cab to try to get Tim to come along with her, the frightened cab driver takes off. After Denise turns off the alarm, Woo covers for herself by telling Denise that she is from the state repossession agency and has come to take the car, explaining that the agency caught up with Tim and he directed them to her. Denise mocks Tim for not having the guts to come get the car himself, but just after telling Woo that she will just use her charms on Tim to get him to get another car for her, Tim picks up a brick and smashes the window open with it before telling Denise that she will have to use the subway from now on. Woo snatches the key from Denise’s hand before jumping into the car with Tim and driving away with him.

As they go, they both cheer excitedly over what he just did, and Tim says that he feels like a whole new man, and that is because he now has some “Woo” in him. Seconds later, Woo’s favorite song starts to play over the radio, prompting Tim to stop the car in the middle of a quiet intersection, take her out onto the street, and have a slow dance with her, making up for a moment back at a nightclub they went to where he had a chance to dance with her and didn’t. Unfortunately, shortly after they briefly stop to share a passionate kiss, a semi-truck comes down the road and rams into Tim’s car. Woo asks Tim if he has insurance, but he gives her a facial expression indicating that he doesn’t, and she remarks that he would look better in a Porsche. He agrees, and the film ends with them dancing and kissing some more. 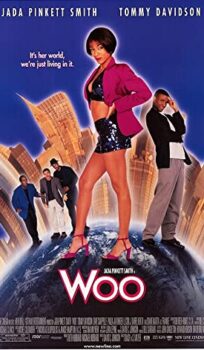