Katharine Parker (Sigourney Weaver) comes back to work, exposes Tess (Melanie Griffith) as an impostor, and takes credit for the proposed merger that Tess had worked so hard to set up. Tess is fired and forced to clean out her belongings.

As Tess is leaving the building, she confronts Katharine in front of Jack (Harrison Ford) and company president Orrin Trask (Philip Bosco). Jack comes to believe that Tess was truly the mastermind behind the merger and takes her side. Orrin decides to test Katharine by asking her how she came up with the idea for the merger. When Katharine draws a blank, Orrin realizes that Tess was telling the truth.

Orrin fires Katharine, and gives Tess a major promotion. Tess gets a fancy new office and a secretary of her own. Tess, who had always been a secretary herself, makes a point of treating her secretary as a professional and as an equal. 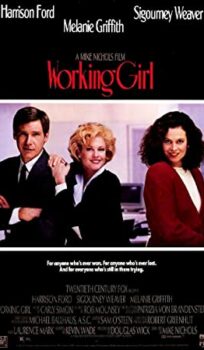