Gerry Lane (Brad Pitt) discovers that the zombie virus does not infect, or like, unhealthy and possibly terminal host bodies.

While being trapped in the World Health Organization (WHO) facility, trying to get some curable diseases, he uses a vial on himself to get out of the zombie filled air bridge.

If a human host is infected with a disease, it acts as a camouflage, so the zombies do not go after you.  This information is circulated throughout the world.  A new vaccine is being dropped off in remote areas to act as a zombie deterrent.

Gerry is reunited with his family who was taken to a refugee camp in Nova Scotia, Canada. 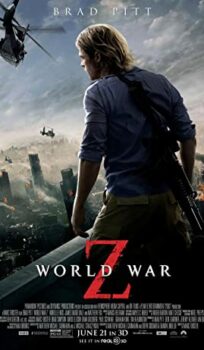