Zia (Patrick Fugit) is in love with Desiree (Leslie Bibb); she dumps him so he cuts his wrists and dies.

After he dies he ends up in a hot desert version of the US where nobody is allowed to smile. This is the afterlife where all suicides go when they die. Zia meets Eugene who’s entire family is in this limbo all having killed themselves for various reasons.

Zia finds out that a month after his death Desiree also killed herself and Zia and Eugene set off on a road trip to look for her.

As they begin their trip they pick up Mikal (Shannyn Sossamon), a hitchhiker, who believes that she is in limbo by mistake because she never meant to kill herself, she overdosed. Mikal is looking for “the people in charge” so that they can hear her case and send her back to earth.

Nobody seems to believes that these “people in charge” really exist and think that Mikal’s search is stupid. So the three Zia, Mikal and Eugene set off in Eugene’s car to find Desiree and the people in charge.

On their travels they realize that there is a black hole under the passenger seat of their car where sunglasses, cassette tapes and other items disappear never to be seen again, also the headlights of the car don’t work and have never been able to be fixed. As the three are driving at night Milka touches a button and almost magically the headlights suddenly work. Eugene is so excited that they work that he keeps turning them on and off while driving. While they are off for a moment he nearly hits a man who is laying asleep on the road, they narrowly miss him and swerve off the road hitting a pole. The strange man in the road invites them back to his house where dozens of very odd people are performing small miracles like changing the colors of things, levitating and things. Eugene finds a mute woman who throat sings and they fall in love. Mikal and Zia also grow much closer but they realize they must continue looking for Desiree and the “people in charge”.

The leader of the camp who’s dog has been missing since they met him on the road gets word that a messiah called The King has the dog and is planning on performing a real miracle. Zia and Mikal offer to go help retrieve the dog because they think that The King may know who is in charge. When they finally get to the King, he does have the dog and Desiree is with him. We learn that Desiree had basically joined a cult after Zia died and she was following The King, when the King tried to separate his soul from his body he accidentally committed suicide and ended up in limbo. Once Desiree was told that The King had died she jumped off the hospital building and killed herself to follow the King.

Desiree apologizes to Zia for hurting him and runs off to help The King once again trying to separate his body from his soul. Zia seems to instantly lose interest in Desiree and looks for Mikal.

Desiree and the King go to the top of a building and the King stabs himself in the chest, Desiree pulls the knife out of his chest and parachute’s start to fall from the sky. All the onlookers think it’s the King returning to his body but it’s actually “The people in charge.”

Everyone leaves but Zia, and we see him sitting and waiting for her to return. Instead Eugene picks him up and tells him they have to go to the train station, Zia is told that Mikal was granted access to go back to her life because she was never a suicide. Mikal then puts Eugene and his new girlfriend on a train so they can move to the North Pole and become throat singers.

Zia takes Eugene’s car and starts to drive back to the town he started in no longer interested in finding Desiree. As he is driving home his stereo acts up and he leans down to fix it falling into the black hole under the passenger seat. You see the head Person in charge who they had nearly hit with the car and he is pulling Zia’s suicide file off a shelf and puts it in his jacket. He then tells Zia that he is very lucky and its good to know people in high places.

Zia wakes up in a hospital his wrists covered in bandages and his worried family talking to a doctor, he looks over and in the bed next to his is Mikal who is there being treated for her overdose. The two smile at each other implying that they know and love each other. 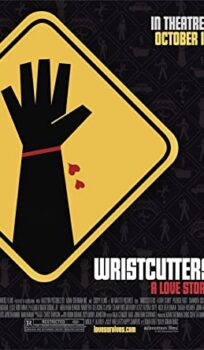