Sebastian Shaw’s plan is to use his mutant power to absorb the radiation of a small reactor he has in his submarine. Erik infiltrates Shaw’s submarine, and has Charles lock his mind once he manages to get Shaw’s telepathy-blocking helmet off. Charles will not release Shaw for fear that he might harm Erik. Erik puts on the helmet to keep Charles (and later Emma) out. Erik tells Shaw that he agrees completely with Shaw’s idea of mutants ruling over humans, but he still needs to avenge his mother’s killer. Charles can feel the pain as Erik slowly pushes the Nazi coin through Shaw’s head.

Erik comes out and informs the mutants that both the American and Soviet ships are aiming for them on the island (an attack ordered by one General Stryker, William’s father). Charles confirms that it is an unprovoked attack. Erik redirects all the missiles back at the ships, but Charles and Moira intervene. As Moira shoots at Erik, one of the bullets he deflects hits Charles. Erik blames Moira, but Charles explains that it was Erik’s fault for not controlling his rage.

Erik tells the mutants that a war between mutants and humanity will come. Mystique decides to join him, Angel, and the remaining members of the Hellfire club.

Charles takes Moira and the remaining mutants to his mansion in Westchester, NY (Holla!!). Moira promises to not reveal their location to the government. Charles ensures this by erasing her memory.

In the final scene, Erik releases Emma from prison with a revamped look, and a new name: Magneto. 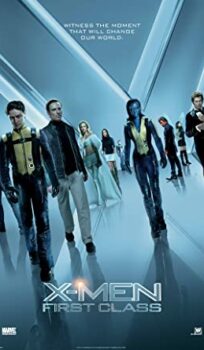