The movie is a collection of four horror shorts, so each ending is as follows:

“The Box”
The son eventually tells his sister and dad what was in the box and they stop eating too. One by one they die of starvation until only the mom is left. She rides the subway looking for the man with the box to hopefully find the secret and join her family.

“The Birthday Party”
Despite the mom’s attempts to keep her daughter from seeing the dead body, the head of the panda suit she hid him in falls off and he is revealed to the whole party. Then the rest of the title flashes across the screen”… Or the memory that Lucy repressed from her seventh birthday party, that wasn’t really her mother’s fault (but her therapist says is probably why she fears intimacy.)

“Don’t Fall”
One of the hikers gets possessed by the evil spirit in the camp ground and kills the other three.

“Her Only Living Son”
The boy is the son of the devil. When the mom realized they wanted him for their own she ran. On is 18th birthday the devil wants him but his mom says he makes the choice. So he chooses to die with her.

The wraparound doesn’t deal with any of the stories, but has some cool stop-motion animation on a sentient dollhouse. 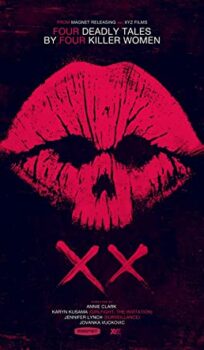