SHORT VERSION:
With the aid of the soldiers loyal to him back when he commanded the Navy SEALs unit that Stone was involved with, Deckert seeks to execute a coup d’état against President Sanford during his State of the Union Address in the Capitol Building and kill him, as well as the Vice-President and the Speaker of the House, so he can become the next President. He is against a new bill that Sanford aims to implement that will make cuts to various military branches in order to focus on international aid, so becoming President would enable him to nix it. He had the soldiers in the aforementioned old unit that were against him captured and kept alive so they could take the blame for killing Sanford and the others, with Gibbons as its mastermind, which will be believed because Gibbons was always known for fighting the system. Deckert also had General Pettibone killed because he let him in on his scheme and he didn’t support it, and Pettibone’s funeral gave his soldiers they excuse they needed to be in D.C.

Stone and Steele foil Deckert’s plan and rescue Gibbons and the other soldiers with the aid of Zeke and the latter’s gang, and all of Deckert’s soldiers are killed save for his right-hand man Cobb. Deckert and Cobb escape with Sanford on the presidential bullet train, and Stone gives chase in a fast car Lola provides for him while Steele and Gibbons follow in a helicopter. Stone manages to get aboard the train and first kills Cobb before fighting Deckert, during which Steele is able to get in and safely extract Sanford. Then, when the train goes over a bridge, Stone jumps into the water below while Gibbons blows up the train with a missile and kills Deckert.

The White House covers up the truth behind Deckert’s failed plot by telling the press that he died trying to rescue Sanford, and he is given a hero’s burial. Steele is awarded the Medal of Honor, as is Stone (though he doesn’t claim it in person). Stone decides to return to his old life, and he shares a couple of kisses with Lola before he drives off in a classic car she gives him. Meanwhile, at the rebuilt NSA Headquarters, Gibbons, Steele, and Shavers are talking about who will serve as the next XXX agent, and Gibbons says that he has the perfect candidate.

LONG VERSION:
When Stone (Ice Cube) infiltrates the aircraft carrier U.S.S. Independence to investigate a requisition order of troops and armored vehicles that was made by Deckert (Willem Dafoe), he finds and follows Mayweather (Sunny Mabrey) – a woman who once worked for Gibbons (Samuel L. Jackson) and had revealed herself to be in league with Deckert when she set Stone up to make him look like he killed General Pettibone (Ned Schmidtke) earlier in the film – into the bowels of the ship after seeing she is in possession of an interesting-looking map. He finds her in the brig, but he discovers that Gibbons is alive and imprisoned there along with half of their old Navy SEALs unit that backed Stone against Deckert nine years ago and recently went missing. Shortly after Gibbons tells Stone that Deckert had set them all up, Mayweather sounds an alarm, so Stone temporarily knocks her out and takes the map before fighting his way off of the carrier and swimming to safety.

The next day, he has a private meeting with NSA Agent Steele (Scott Speedman) and hands him the map, which turns out to be a military map of the U.S. Capitol building and the streets leading to it that shows attack routes, targets, etc., and he says that Deckert is organizing a bunch of army regiments that served under him during his days as a four-star general to make a move on said building, and he also adds that Gibbons isn’t dead and is locked up along with half of his old unit and Deckert is setting them up for a fall. Steele replies that Deckert is running security for President Sanford’s (Peter Strauss) State of the Union Address tonight and what is showing on the map is targets he is protecting, but Stone replies that this all serves as a perfect cover for his plans (those plans being to kill Sanford in a coup d’état because he seeks to implement a new military bill that will reduce troops, close bases, and cut military research & development so the U.S. can increase international aid and try to turn some foreign enemies into allies, which – unbeknownst to him – Deckert is completely opposed to. Once Sanford is taken out, Deckert can become President and cancel the bill. He kept Gibbons and the others alive so they can take the blame for masterminding the coup, which will be believed because Gibbons was always known for fighting the system, and he killed Pettibone because he let him in on the plan and he was against it, plus his funeral would give the soldiers he recruited an excuse to come to D.C. without stirring any suspicions). Steele doesn’t believe that this is enough evidence to prove that Deckert is a traitor, so a frustrated Stone leaves. However, Steele later realizes that Stone is correct following his discoveries of both the cargo of the Independence and the Capitol’s security detail being made up of the Navy SEALs soldiers that served with Gibbons and Stone under Deckert’s command, in addition to a conversation he has with Deckert.

Steele finds Stone and Agent Shavers (Michael Roof) at the exotic car shop of Stone’s old girlfriend Lola (Nona Gaye), and he talks to Stone and lets him know that he was right. He then shows him a floor plan for the State of the Union Address and tells him that Deckert not only aims to kill Sanford, but also the Vice-President and the Speaker of the House so he will have a clear path to the Oval Office, and he can’t contact the White House to warn anyone because he doesn’t know how deep this scheme goes. He tells Stone that they will have to go outside the box on this one, and Stone suggests that they recruit some trustworthy men from outside the law. To that end, they visit the chop shop Lola used to own, now run by Stone’s friend Zeke (Xzibit), and Stone persuades him to get his crew together and assist them in stopping Deckert. To get some heavy-duty firepower for the task, Stone, Zeke, and his boys steal a stockpile of weapons from Homeland Security that is being secretly shipped in a civilian semi-truck.

As Sanford is giving his speech and taking about his new bill, Stone, Steele, Shavers, Zeke, and Zeke’s gang of hustlers and thieves drive through the back alleys and warehouses to the Capitol Building to bypass the military blockades, and along the way, they manage to steal a tank and have that lead the charge. Just then, a Deckert-planned power outage hits the Capitol Building, and as Sanford is being moved into a secluded area, a bunch of Deckert’s men drop down from the ceiling and lay waste to Sanford’s bodyguards, and Sanford realizes that Deckert is a traitor. Stone and company make their arrival outside, and Stone gives Zeke command of the tank before he and Steele go for the door on foot. Just as Deckert orders one of his men to take out Sanford, Stone gives Zeke the order to fire a shell at the wall, and the blast prevents Sanford from being killed.

Stone and Steele go into the blast hole and start killing Deckert’s men while Deckert and his top henchman Cobb (John G. Connolly) flee with Sanford, and Deckert radios to Mayweather to bring Gibbons up to their location. However, Mayweather and her subordinates are spotted by Stone and Steele first, who gun down the goons and rescue Gibbons and the other Navy SEALs, and Gibbons himself kills Mayweather when she tries to shoot Stone. When Cobb contacts Mayweather asking where Gibbons is, Gibbons answers and tells Deckert to give up while he still can, and Deckert tells Cobb that they will fall back to the emergency presidential bullet train three stories below them. Stone asks Gibbons what Deckert’s backup plan would be, and Gibbons mentions the train, and he orders Stone to get going when more of Deckert’s heavies show up with guns blasting. Stone is too late in catching the train, however, so he calls Shavers and says he needs a fast ride in order to reach them, and he goes outside and gets met by Lola driving a fast car. He gets into the driver’s seat and takes off, and moments later, he rings up Steele and asks where the train is heading, and he says it is going straight up Interstate 95. Stone hangs up, and Steele and Gibbons board a chopper and go after him.

After a long high-speed chase, Stone manages to get out of his car and aboard the train, but he comes under attack from Cobb while searching the kitchen. During the fight, Cobb drops a lighter and a gas line is slashed, and just when he has Stone pinned down, Stone grabs the lighter and flicks it on before throwing it at the gas, and the resulting explosion blows Cobb out of the train to his death. Deckert forces Sanford out of the cockpit at gunpoint while Gibbons and Steele come in from above and Steele is lowered down by a cable onto the train, and Stone and Deckert soon meet up. Stone shuts off the lights and throws a smoke bomb, then opens an emergency door so Steele can get in before tackling Deckert when he hears Sanford fighting back. Steele grabs Sanford and lifts him away while Stone and Deckert continue to fight, and Stone soon jumps out of the train when it is over a bridge and lands safely in the water below. Gibbons then fires a missile from the chopper at the train, destroying it and killing Deckert. 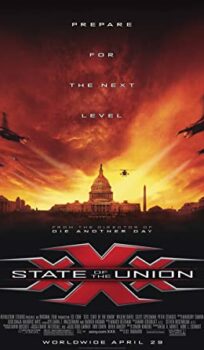