After years of retirement, during which he feels he and his music have been forgotten, George M. Cohan (James Cagney) makes a big comeback playing President Franklin Roosevelt in the Rodgers and Hart musical “Of Thee I Sing.”

Shortly after the start of World War 2, the real President Roosevelt summons Cohan to the White House and gives Cohan the nation’s highest honor: the Congressional Gold Medal.

Cohan dances down the White House stairs. As he leaves, he sees and joins with a parade of American soldiers who will soon be shipping out to fight Hitler in Europe. The soldiers are all singing Cohan’s patriotic song “Over There.” One soldier asks Cohan, “Don’t you know the words?” Cohan proudly sings with them as the credits roll. 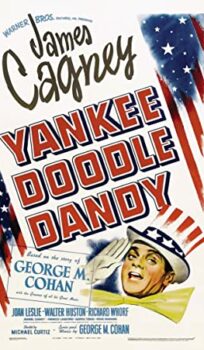