Carl Allen (Jim Carrey) is hiding from life after being dumped from his 6 month marriage to Stephanie (Molly Sims).  His lawyer best friend, Peter (Bradley Cooper) tried to draw him.  When Carl misses Peter’s engagement party to Lucy Burns (Sasha Alexander) he gives up.

Carl’s friend, Nick (John Michael Higgins) convinces him to attend a “Yes” seminar.  Terrence Bundley (Terence Stamp) the ring leader of the ‘Yes’ people makes a ‘covenant’ with Carl that he has to say ‘yes’ to every offer he gets.

Various comedic events occur.  Carl comes out of his shell and meets Allison (Zooey Deschanel).  When she wants to move in with him he gets scared.  He seeks out Terrence.  Who explains that saying ‘yes’ to everything is just the start until you realize what you really want and can say no to things again.

Allison and Carl do not move in together but are still together.  Norman (Rhys Darby) hooks up with Soo-Mi (Vivian Bang) from the bridal shop.  We assume Nick and Lucy get married.

At the end Carl is shown donating a truck load of good clothes to the homeless shelter.  Pan to a sea of naked people at the ‘Yes’ seminar.  I guess they didn’t realize you can say no to things.

During the credits there is a video of Carl and Allison trying out the new skate suits created by one of the loan applicants. 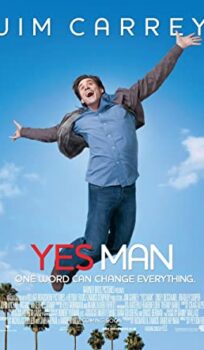