Sanjuro Kuwabatake (Toshirô Mifune) plays bodyguard to both sides of the gang war, bidding up his fee and switching sides frequently between Seibei (Seizaburô Kawazu) and Ushi-Tora (Kyu Sazanka) until he gets a soft spot in his heart for Kuemon’s “girlfriend,” and he frees her from her concubinage. When Usho-Tora’s men realize that he’s responsible for the woman’s escape, they capture Sanjuro, and beat him within an inch of his life. Even as a bloody pulp, he retains his wits enough to escape, and leads Ushi-Tora to believe that he’s fled back to Seibei. Ushi-Tora’s men murder Seibei’s entire gang and family, but don’t find the bodyguard. Evenually, Ushi-Tora realizes that Gon the innkeeper (Eijirô Tono) is helping Sanjuro, and uses him as bait in a trap. Our hero returns for one last showdown, which leaves Ushi-Tora’s gang dead. Sanjuro heads out of the now-peaceful town, no richer (but certainly much wiser) than when he arrived.

This movie was remade as A Fistful of Dollars and as Last Man Standing. 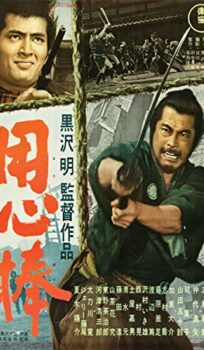