Walbridge (Michael Buffer), is trying to destroy the Israeli/Palestine community so he can build his megamall. He stages a hacky sack tournament to distract everyone so his goons (dressed as middle-easterns) can destroy all the shops to make it look like the citizens did it.

To fight back, Zohan (Adam Sandler) and Phantom (John Turturro) settle their differences and team up, partly influenced by Zohan’s romance with Dalie (Emmanuelle Chriqui), who happens to be Phantom’s sister (Can you say “West Side Story”?).

Zohan and Phantom make short work of the puny American impostors, and Walbridge is immediately arrested.

Although all the shops were burned down, the citizens are able to pull together to build “The Fire Insurance Mall”, which includes several of the shops seen earlier in the film, including Zohan’s own hair salon and Phantom’s passion, a shoe store.

Zohan’s parents come to the States to visit and grant their post-ceremonial wedding blessing on Zohan and Dalia. 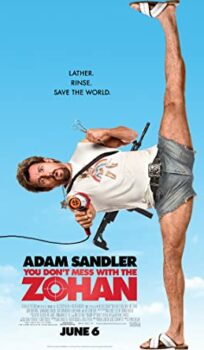