Newlyweds Molly and Carl, (Kate Hudson and Matt Dillon) allow Carl’s best friend Dupree(Owen Wilson) to live with them after he loses his house. Dupree acts like a total kid which gets on Molly’s nerves. Molly decides to set Dupree up on a date. When Molly and Carl return home they find Dupree having sex with his date. One thing leads to another and candles that Dupree lit catch the house on fire. Carl makes Dupree leave.

Later on when the couple is driving they find Dupree in the rain with nowhere to go. Molly lets Dupree come back to their house.

As time goes by Dupree becomes a better person and he and Molly starts to connect. Due to the fact that Molly’s dad who happens to be Carl’s boss (Michael Douglas) has been treating Carl badly, he has to work all the time. Molly gets hurt by this and turns to Dupree. As time goes by Carl gets jealous of Dupree which leads to a physical conflict. Carl then runs off.

Dupree spends most of the end of the movie looking for Carl. When he finds him, he convinces him to take a stand against Molly’s dad. They do and it leads to a chase sequence between Dupree and a big guard named Paco.

In the end Carl confronts Molly’s dad and he agrees to give Carl a break. End of the story is that Molly and Carl work everything out and Dupree becomes an author and a motivational speaker. 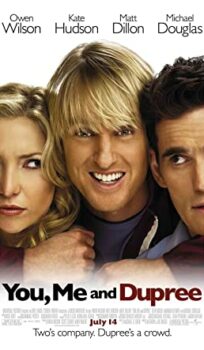