Roald Dahl’s wacky screenplay has SPECTRE secretly using a reusable spacecraft launched out of a dormant volcano on the island in the Sea of Japan to gobble up a U.S. two-manned Gemini-like spacecraft!

The Russians are blamed and with another U.S. launch upcoming, 007 (Sean Connery) must solve the mystery to avoid a nuclear confrontation.

Bond is captured after infiltrating the underground complex and attempting to slip into a SPECTRE spacecraft disguised as an astronaut. The SPECTRE spacecraft is launched to intercept the U.S. mission as U.S. long-range strategic nuclear bombers are placed on alert.

Bond escapes the clutches of Ernst Stavro Blofeld (Donald Pleasence) and opens the false top of the volcano, allowing Japanese Secret Service agents Kissy Suzuki (Mie Hama) and Tiger Tanaka (Tetsuro Tamba) to bring in an attack force that rapells down on ropes into the complex. The complex is overrun, Blofeld escapes, a self-destruct signal is sent to the SPECTRE spacecraft before it can capture the second U.S. space capsule and a nuclear confrontation is averted. 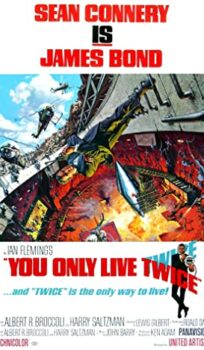