Short Ending:
After having a meltdown at Buddy and Beth’s naming ceremony, Mavis has an emotional breakdown at Matt’s house where the two have a night of emotional sex. The next morning, Mavis drinks coffee with Matt’s sister Sandra, in which Mavis claims that she needs to change her life and find happiness, but Sandra tells her that the people in the town are small-minded and that Mavis has a great life and is a great person. Mavis returns to check out of the hotel, throws away all of her mementos of Buddy and finishes her book on a positive note. Mavis throws away her mementos of Buddy and leaves town in a car she wrecked several times throughout the film. Like her car, Mavis’ life is clearly a mess, and like her car, the film ends without us discovering if it will ever be fixed.

Long Ending:
Mavis Gary (Charlize Theron) is essentially a ghost-writer for a semi-popular young adult novel series (the series seems to be modeled after Sweet Valley High). Although the creator of the series gets top-billing, Mavis has seemingly written the most recent bunch, getting her name in small print on the inside cover as the author. The publisher, citing diminishing interest in the series, is having Mavis write the final book, although she seems to be suffering from writer’s block. Mavis constantly listens to the conversations of teenagers and watches adolescent shows (i.e. The Kardashians, America’s Got Talent, etc.) as a means to incorporate popular phrases into her book (and as we find out later, she personally finds these adolescent notions of love and beauty to be romantic). Mavis keeps a dirty apartment, engages in meaningless one-night stands, and neglects her dog Dolce. When she gets an email from high-school/college sweetheart Buddy Slade (Patrick Wilson) announcing his new baby, Mavis decides to leave the “big city” of Minneapolis to return to her hometown of Mercury to win him back.

Upon arriving, Mavis immediately begins drinking more heavily and begins finding inspiration for the final book. While at a local bar, she meets Matt Freehoff (Patton Oswalt – or as Mavis calls him “Hate Crime Boy”), a classmate who was brutally beaten by jocks in high school because they erroneously believed him to be gay. Crippled by the attack, Matt walks with a crutch, drinks heavily and distills his own bourbon, builds model toy figurines, and lives with his sister Sandra. They bond over alcohol and their self-loathing (Matt often can’t believe how Mavis can think she has a bad-life) and she confides her plan and its progress to him, much to his constant disapproval. She and Buddy begin hanging out by day, where Mavis goes to great length to look good (constant salon treatments and hair extensions), and then becomes unhinged with Matt at night, often passing out on her bed with all of her clothes on.

Mavis meets Buddy’s wife Beth (Elizabeth Reasor) and their baby, and grows  convinced that Buddy is not happily married. Mavis also sees her parents, admits that she is an alcoholic (to which they turn a deaf ear) and collects some of her mementos shared by she and Buddy during her high school days. She and Buddy attend a concert put on by a bunch of local women with Beth on drums, at which Mavis essentially gets Buddy too drunk to drive. Mavis drives Buddy home, and they kiss on the steps before being interrupted by the baby-sitter, and Buddy drunkenly stumbles into the house. Mavis thinks things are going well, and she continues writing more chapters in the book. She is invited by Buddy to the baby-naming ceremony, and when she tells all this to Matt, they get into a bitter fight with both pointing out the flaws in each other.

When Mavis arrives at the baby shower, she asks to speak to Buddy in private. While in the baby’s nursery, she confesses her love to him and tries to kiss him, a proposition he violently rejects (and it seems he has no memory of their kiss earlier in the film). He leaves her to prepare Beth’s present and Mavis begins drinking. Everyone goes outside where Buddy will unveil Beth’s present (a drum set with her band’s name on it) when Beth accidentally spills juice on Mavis’ dress. Mavis melts-down and curses Beth out, and then can’t believe when nobody in the entire town, including Beth, will rebuke her. She reveals that this could have been her life as she miscarried a baby she had conceived with Buddy (although nobody else confirms this story to be true). Having utterly ruined Beth’s surprise and the party, Buddy tells Mavis to leave. She yells that she only came back for him and complains that he has led her on, but he responds that he only kept seeing her and invited her to the party because Beth pitied her and forced him to do so.

Mavis ends up fleeing to Matt and Sandra’s house. In an emotional moment, she decides to sleep with Matt and their sex appears to be passionate, though awkward. Mavis confides in Matt that she wanted Buddy because he knew her when she was at his best, and Buddy tells her that she was not in her best at high school because at that phase, she never even paid any attention to people like him. Matt also reveals that he has deep feelings for “people like her.” The next morning, Mavis goes upstairs while Matt remains passed out to find Sandra, and they both begin talking over coffee. Mavis says that she is depressed and has a hard time being happy and wants to feel the same happiness as the people in the town. Sandra says that Mavis should love her life because the people in Mercury are small-minded hicks who live meaningless lives whereas Mavis is beautiful, successful, does impactful work in the big city, and is not constrained by her small-town roots. Sandra asks Mavis to take her with her to Minneapolis, but Mavis tells Sandra that Sandra is perfectly suited to live her life in Mercury, then she leaves without saying good-bye to Matt.

In voice over, we hear the end of the final book in the series Mavis now writes. The character seemingly based on Mavis graduates and, while she will keep the memories, looks forward to embracing her adulthood and leaving the town and high school behind as she enters a bigger life. The character seemingly based on Buddy dies at sea, seemingly lost forever to the Mavis character except as a bittersweet memory. Mavis throws away her mementos of Buddy and leaves town in a car she wrecked several times throughout the film. Like her car, Mavis’ life is clearly a mess, and like her car, the film ends without us discovering if it will ever be fixed. 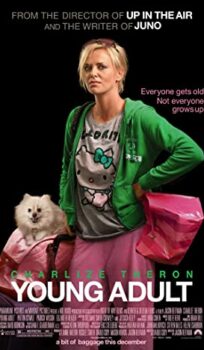