Pooper:
Erin manages to kill the three mercenaries, along with the two brothers who had hired them. Unfortunately she is shot by a police officer who mistakes her for the murderer. The officer is then killed by a trap set up by Erin earlier in the film and it is unclear whether she will survive the gunshot wound.

Long Ending:
The film begins with two people at a country house. The woman is murdered by a man in an animal mask while her boyfriend takes a shower. When the boyfriend gets out of the shower, he sees the words “you’re next” written in his girlfriend’s blood. He is then attacked and killed as well.

We cut ahead to a huge estate neighboring the house where the (still undiscovered) murders have taken place. The mansion is owned by an exceedingly wealthy couple, Paul and Aubrey. They are planning to have their entire family (three sons and a daughter) over for the weekend. It has been a long time since the family has all been together.

First to arrive is their son Crispian (A.J. Bowen) and his Australian girlfriend Erin (Sharni Vinson). Crispian is a down-on-his luck professor, and Erin is his former Teacher’s Assistant and a poor graduate student. Later on, they are joined by Crispian’s brother Drake and his wife Kelly, sister Aimee and her boyfriend Tariq (Ti West), and the youngest son Felix (Nicholas Tucci) and his girlfriend Zee (Wendy Glenn).

At dinner, it is apparent there is a lot of tension in the family, particularly between Crispian and Drake. During an argument, Tariq sees something through the window and goes to get a closer look. Unfortunately for him, a crossbow bolt is fired through the window directly into his head. Havoc immediately breaks out and Drake and Paul are injured. Erin, however, seems collected and immediately moves the family into a location safe from the crossbow shooter and treats Drake’s wounds. They discover their cell phones are jammed (though Erin sends a text to the police, which she says will eventually be processed as a phone call). Eventually Aimee (as the fastest runner) decides to make a run for the car, but is killed by a trap set by the assailants.

Depressed over the loss of her daughter, Aubrey mourns in a room upstairs while Erin begins locking all the windows and doors in the house. Aubrey is killed by an assailant that was hiding under the bed (and later discovered to have been in the house the entire time), who then uses Aubrey’s blood to write the “You’re Next” message on the wall. The remaining survivors determine there are three assailants, all wearing animal masks. Kelly panics and runs out of the house to the neighbor’s house, only to discover that they are dead (they are the ones who were killed at the beginning) before she is found and killed by an assailant.  Crispian also leaves the house to try and go for help (after discovering the cars are all dead).

One of the assailants attacks Erin too, but she manages to beat him  up and kill him (much to the surprise of everyone remaining). Erin confides in Zee that her parents raised her in a survivalist commune in the Outback (a fact not even Crispian had known), and she begins setting more traps throughout the house. Meanwhile, an assailant finds and kills Paul, before it is revealed that the threesome are former mercenaries (former military) who were hired by Felix and Zee to kill the family (they killed the neighbors to make it look like a non-targeted attack). With Felix and Zee as the only survivors, Felix stands to inherit the sizable estate. Eventually, Erin discovers that the mercenaries work for Felix and Zee and she ends up killing all of them.

After Erin kills Felix, she sees that Crispian is calling Felix on his cell phone. Crispian has returned to the house and asks Felix over the phone if it is all “over.” Erin confronts Crispian, who admits that he was in on the entire thing. He explains that the mercenaries were only meant to injure her, but let her live. Crispian, Felix and Zee all had prior criminal records, so Erin was going to be the one “clean” reputable witness that the attack had been random. Erin’s survivalist skills ruined the plan, but Crispian says that now he is the sole heir, he will marry Erin and they will live a lavish life of luxury together. Erin disagrees and kills Crispian. Erin is then shot by a police officer who had finally received her text and showed up just in time to witness Erin kill an unarmed Crispian. Although Erin is not killed by the shot, the police officer is killed by a trap set by Erin earlier in the film. The film fades to blood red as Erin (completely alone now) continues to bleed from multiple wounds. 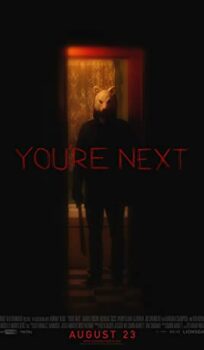