The film follows five unrelated couplings over one night of sex.

The Exes: Eric (Josh Cooke) and Mia (Sonja Bennett) are exes who went on a date to catch up. She invites him in and they have a night of sex and talking about their lives and what went wrong with their relationship. It is somewhat awkward and their stilted goodbye makes it clear they found this night to be a mistake.  Despite caring for one another, it is implied they do not get back together.

The First Date: Womanizing Ken (Callum Blue) takes Jamie (Diora Baird) out a date, claiming to want to be more.  They still go back to her apartment and proceed to have sex.  After apparently pleasuring Jamie well, Ken leaves the room momentarily only to come back and find Jamie taking care of business herself. Angry she lied, it devolves into an argument where Jamie admits she played innocent so Ken would want to have sex with her but was disappointed with how it turned out. Ken leaves and appears to want to change again, but chats up a hot woman in the elevator proving old habits die hard.

The Roommates: Gord wants to watch his roommate Dave have sex with his girlfriend while he watches. It seems to work but after Dave continues to have sex with her, jealously sets in and Gord attacks Dave. The three talk it out and everything is worked out though Dave is quite freaked out by the whole situation.

The Couple: Married couple Abby (Kristin Booth) and Andrew (Josh Dean) try to bring their sex life some excitement by trying something “new” in the bedroom. Though Andrew is reluctant he goes through with it though not without some awkwardness. However the experience puts the spark back in their marriage and they proceed to have normal sex.

The Best Friends: Matt (Aaron Abrams) and Kris (Carly Pope) are best friends for years who have gotten out of bad relationships and decided (by Kris’ suggestion) to have sex. It does not go as planned. However, when they realize they both had crushes for each other at various times, they work it out to have a robust sex session.  In the midst of their mutual climax they both say “I love you”.  Though it is weird for both of them afterward, they realize that there is something there worth giving a shot, and proceed to have sex again. It is inferred they become a couple. 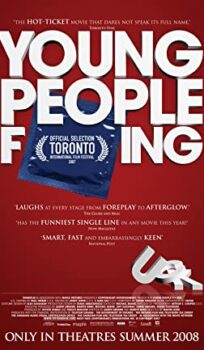