Zachariah orders a gun through a mail order catalog, and spends a lot of time in the desert learning to shoot. He recruits his blacksmith friend Matthew (Don Johnson), who practices with him. An outlaw gang, the Crackers (played by Country Joe & the Fish), ride into town. The Crackers fail at robbing the bank, but begin a musical jam session in the saloon. Matthew likes their music, leading to a dispute with an old cowboy. When the cowboy threatens them, Zachariah shoots him dead.

Zachariah and Matthew must flee the town. They join the Crackers for a while, but realize that this inept gang is going nowhere. They join Job Cain’s gang. Job is widely regarded as the most dangerous gunfighter around. Zachariah suddenly has a premonition that if they stay with Job, one of them will end up killing the other. He begs Matthew to leave with him. Matthew is entranced by Job’s lifestyle and stays.

Zachariah ends up living peacefully with a wise old hermit, growing vegetables. Matthew eventually challenges and kills Job. Matthew seeks out Zachariah and challenges him to a duel. Zachariah refuses, but Matthew continues to provoke him. Zachariah tries to make light of it, and revive their old friendship. Zachariah finally rides off alone rather than fight. Matthew sees the error of his ways. Matthew follows Z, and the two ride off into the sunset together. 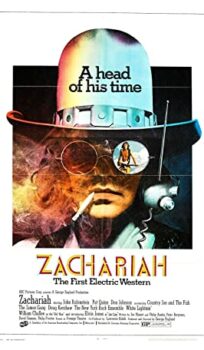