Pooper:
Umeno recovers from her wound in time to stop Sasso the Yojimbo and Zatoichi from killing each other. The town is now freed from the corrupt leaders. Sasso and Zatoichi forego the remaining gold and go their separate ways.

Long Ending:
The film opens with Zatoichi (Shintarô Katsu) the blind swordsman living in exile. He is a wanted man and constantly attacked by mercenaries. Becoming fed up with the discomfort of this life, Zatoichi decides to visit a town he once lived in. When he arrives, he finds it much changed. The town is ruled over by two gangs. One gang is led by the wealthy silk salesman Yasuke Eboshiya, and the other is presided over by his younger son Masagoro.

Masagoro’s bodyguard (called a Yojimbo) is a drunken but talented samurai named Sasso (Toshirô Mifune – though a different character, he is clearly meant to evoke his character from the famous Akira Kurasawa Yojimbo films). Sasso is in love with a local geisha named Umeno (Ayako Wakao). Though she wishes to be with Sasso, she is trapped in the town as she owes Eboshiya $200.00 and essentially belongs to him until she pays him back. She hates both Eboshiya and Masagoro, but can’t convince Sasso to do anything about them. Zatoichi is soon recognized as a wanted man and he and Sasso briefly fight  before the police arrest Zatoichi. Ultimately, Eboshiya bribes the police to  release Zatoichi, who then agrees to serve as Eboshiya’s bodyguard and masseur. It is also revealed that Zatoichi was friendly (possibly in love with) Umeno from his last stay in the town.

Zatoichi soon reconnects with his friend and former mayor of the town. The mayor explains that the gangs seized control during a famine and many were killed before a truce was struck. He now builds idols commemorating each murdered townsperson as penance. Eboshiya pays for the idols, allegedly as a form of penance. Zatoichi also learns that Eboshiya’s older son Sanaemon works for the mint. He soon deduces that Eboshiya and Sanaemon have conspired to launder gold during the minting process of new cash and that the stolen gold is being stored somewhere in the town.

A new assassin named Kurzuryu arrives in town and Masagoro fears that Eboshiya has retained his services to kill him. Kurzuryu does murder the former mayor on Eboshiya’s orders.  We learn that Sasso and Kurzuryu are actually undercover government investigators who have been ordered to expose Eboshiya’s racket. They are both searching for the gold Sanaemon is sending to Eboshiya. To further their ends, Sasso goads Masagoro to begin destroying his father’s property to find the gold for himself. Sasso and Zatoichi also strike an alliance to help expose the racket and both resolve to manipulate their respective bosses into an all-out war (with Sasso speculating that in the event of renewed conflict, Eboshiya will try to retrieve the hidden gold).

Zatoichi convinces Eboshiya to pay him $300.00 to fight for him in the brewing conflict. He gives the money to Umeno so that she can purchase her freedom and be with Sasso. Eventually a fight breaks out between the two sides. Zatoichi finally deduces that Eboshiya had been using the mayor’s idols as vessels to hide the gold (in the form of gold dust). He convinces some of the mercenaries to abandon the battle and they remove all the gold dust from the idols and lump it into a big pile. Meanwhile, Sasso leads the attack and tricks Sanaemon into wounding Eboshiya (and he also mauls Masagoro). Enraged at the betrayal, Eboshiya goes to retrieve the gold. He and Sanaemon fight over the pile of gold and Eboshiya kills his son. Kurzuryu then kills both Eboshiya and Masagoro.

Sasso chastises Kurzuryu for killing the witnesses. Kurzuryu reveals he intends to take the gold for himself and tries to shoot Sasso. Umeno jumps in the way and is shot. Sasso kills Kurzuryu and then takes Umeno for medical attention. Meanwhile, Zatoichi kills all the mercenaries that helped him recover the gold (they were secretly working for Kurzuryu and attacked him). Upon Zaitoichi’s victory, no gang members or mercenaries remain alive and the townspeople are freed from their dictators.

Believing Umeno will die and angered over Zatoichi’s seemingly pure nature, Sasso attacks Zatoichi (possibly also seeking to collect the price on his head).  The fight grows more intense until Umeno calls out for both of them, having successfully recovered from her bullet wound. She and Zatoichi share a fond good-bye. Zatoichi, realizing he lost the gold he secretly pocketed during his fight with Sasso, returns to the pile of gold and finds Sasso there also trying to collect the remaining gold. Both men realize that they essentially are the same and both walk away from the remaining gold dust (likely also recognizing that the pursuit for the gold has lead to the deaths of all those who tried to take it) and they part company with a newfound respect for each other. 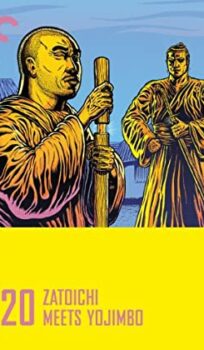