Robert Graysmith (Jake Gyllenhaal) concludes that Arthur Leigh Allen (John Carroll Lynch) was the killer. His book on the Zodiac becomes a bestseller, but his obsession with it costs him his marriage. In the final scene, Mike Mageau (Jimmi Simpson) positively IDs Leigh as the guy who shot him 22 years earlier.

Supertitles tell the rest of the story: Leigh died of natural causes before police could question him, Graysmith has a good relationship with his children, Zodiac-chasing journalist Paul Avery (Robert Downey Jr.) died, and San Francisco cop David Toschi was cleared of charges that he’d mailed a fake Zodiac letter to get attention. 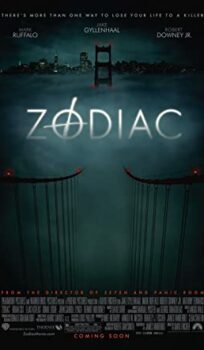