In the years since they became a makeshift family, zombie apocalypse survivors Columbus (Jesse Eisenberg), Tallahassee (Woody Harrelson), Wichita (Emma Stone), and Little Rock (Abigail Breslin) continue to travel across Zombieland for any place to call home. However, Little Rock becomes annoyed at Tallahassee still treating her like a child, while Wichita becomes startled when Columbus tries to propose to her. The sisters run away together, leaving Columbus and Tallahassee alone. They find another survivor, Madison (Zoey Deutch), and Columbus hooks up with her. Wichita returns when she tells the guys that Little Rock ran away with a hippie named Berkeley (Avan Jogia), forcing the guys and Madison to join in getting Little Rock back.

On the road, Madison appears to get bitten by a zombie and seemingly morphs into one, which causes Columbus to have to shoot her. The three then go to Graceland where they meet Nevada (Rosario Dawson), who runs an Elvis-themed hotel. They also meet Albuquerque and Flagstaff (Luke Wilson and Thomas Middleditch), who are almost exactly identical to Tallahassee and Columbus. They fight off stronger, harder-to-kill zombies, leading Albuquerque and Flagstaff to morph into them and get killed. As Columbus, Tallahassee, and Wichita continue their trip, they encounter Madison still alive (she just had a violent allergic reaction).

The gang drives to Babylon, a safe haven for zombie survivors where Berkeley has taken Little Rock. Tallahassee decides to leave his friends there until he sees that zombies are heading there are being attracted to fireworks. They come up with a plan to blow up the zombies with fireworks and a fuel tank, but there are too many of them to kill. Nevada saves the group, and Tallahassee leads the zombies up to a tower, causing them to fall to their deaths.

In the end, Columbus and Wichita are engaged, Tallahassee and Nevada get together, and Little Rock rejoins her friends while Madison stays in Babylon with Berkeley. 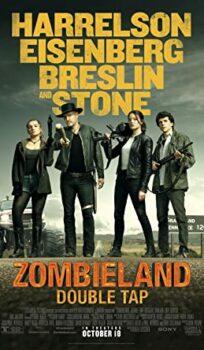