On the way to Pacific Playland, which Columbus (Jesse Eisenberg), Tallahassee (Woody Harrelson, Wichita (Emma Stone) and Little Rock (Abagail Breslin) believe to be zombie-free, the quartet stops at Bill Murray’s mansion. Bill Murray is still alive and has survived by wearing undead make-up and impersonating a zombie. When Bill tries to scare Columbus and Wichita, who are watching Ghostbusters in Murray’s home theater, Columbus shoots Bill in the chest with a shotgun and kills him.

Wichita and Little Rock leave the mansion and arrive at the zombie-free Pacific Playland. When they turn on the rides to have some fun, the lights attract the nearby zombies. With Little Rock and Wichita trapped on top of the “Blast Off” attraction, Columbus and Tallahassee ride to the rescue.

Though it looks grim at times, the four escape Pacific Playland with their lives. Columbus gets his first kiss from Wichita, and learns her first name is Christa.

Bonnie adds:
At the end of Zombieland Little Rock throws a beloved Twinkie to Tallahassee just before they all drive away. 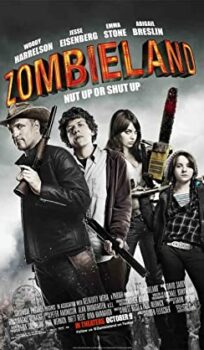